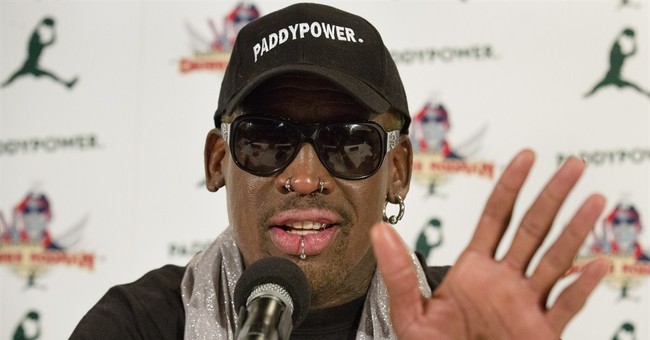 Following his visit to North Korea over the weekend, former NBA star Dennis Rodman announced that he would host an international basketball game in the isolated nation, and even train a North Korean team to compete in the Olympics, in addition to challenging President Barack Obama to open discussions with North Korean leader Kim Jong-Un.

“This is about trying to bridge a gap to a country that people say is so bad,” Rodman said. “This country’s not bad. The marshall now, he wants to change, and I’m there.”

The game, which will feature an American team competing against a Rodman-trained team, will be sponsored by Paddy Power, an Irish betting company, and will occur on Kim Jong-Un’s birthday. The Olympic announcement seemed to come as surprise to the Paddy Power MC.

Rodman, the only American to have contact with new leader, also claimed Jong-Un wanted to open a dialogue with a reluctant west, and maintained that his visits were in service of that goal.

“People think this is a gimmick,” Rodman said. “I would love to make this a gimmick and make a sh*tload of money. But it’s not about the money. It’s about trying to open Obama’s mind.”

Unlike Rodman, I’ve never visited North Korea. Nor do I ever intend to. So I can’t say for certain what a starving and cannibalistic country where people are subjected to slave camps and arbitrary executions might look like. On the other hand, the late journalist Christopher Hitchens did visit North Korea. And here’s what he wrote some years later after he returned:

Here are the two most shattering facts about North Korea. First, when viewed by satellite photography at night, it is an area of unrelieved darkness. Barely a scintilla of light is visible even in the capital city. (See this famous photograph.) Second, a North Korean is on average six inches shorter than a South Korean. You may care to imagine how much surplus value has been wrung out of such a slave, and for how long, in order to feed and sustain the militarized crime family that completely owns both the country and its people.

…Unlike previous racist dictatorships, the North Korean one has actually succeeded in producing a sort of new species. Starving and stunted dwarves, living in the dark, kept in perpetual ignorance and fear, brainwashed into the hatred of others, regimented and coerced and inculcated with a death cult: This horror show is in our future, and is so ghastly that our own darling leaders dare not face it and can only peep through their fingers at what is coming.

If North Korea doesn’t register as a “bad” country, I'm not sure what does. But at least the former NBA superstar seems well-intentioned: He wants to bridge divisions between Washington and Pyongyang. And coaching the DPRK’s Olympic basketball team, he believes, is perhaps one way to make that happen. But Rodman’s delusional if he thinks his efforts will have any affect whatsoever on improving U.S./North Korean relations. Remember, the DPRK is a Stalinist slave state where citizens in 2012 were literally forced to mourn the death of the “Dear Leader” -- Kim Jong-il. Those who refused (or didn’t grieve “well enough”) were sent to forced labor camps. And now, of course, his megalomaniacal son is in charge, continuing the very same deplorable and inhuman policies his paranoid father championed. There’s a reason President George W. Bushed declared North Korea a member state of the “Axis of Evil." So does Rodman really not know this, or is he purposefully choosing to look away?