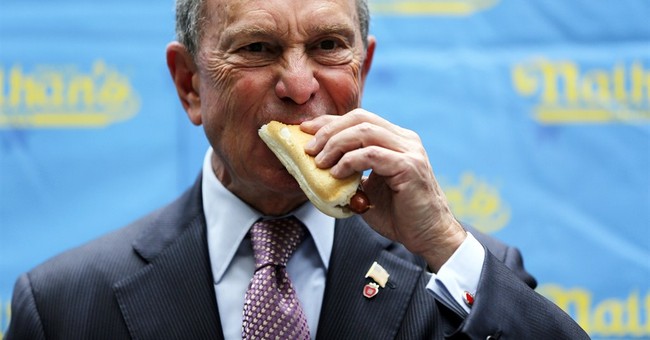 It’s come to this. Bloomberg's sugary drink ban failed in such a spectacularly epic fashion that now he's back on the Nanny wagon, purposefully inconveniencing poor people so that they can (maybe) burn an additional 50 or so calories taking the stairs every day. Brilliant:

As part of his ongoing campaign to transform New York City into what he calls “Fit City,” Mayor Michael Bloomberg is promoting “active design” for low-income housing developments being built there, including plans to prompt residents to use the stairs and rooftop gardens for growing “healthy” foods.

In 2010, the Bloomberg Administration and other public and private sector groups issued the “Active Design Guidelines,” which promotes car-free neighborhoods, encourages “physical movement” inside buildings and “improves access to nutritious food.”

The Center for Action Design was launched next as a resource for architects and developers who sign on to the idea of “promoting health through the design of buildings, streets, and neighborhoods,” as stated by David Burney, Board Chairman for CAD.

The article stated that the “affordable housing” development features murals and music along the stairway, with elevators located farther away from the front door that are “programmed to move at a slow pace.”

I’ve got to at least give Bloomberg points here for trying, don’t I? The man obviously cares so deeply about the scourge of obesity in America that he’ll go to extraordinary and even nonsensical heights to encourage healthy living. That’s admirable, I suppose. Oh, and the muralled walls idea is a nice touch, isn’t it? Personally, I know if I was given the hypothetical option of either riding a somewhat slower elevator to my eighth story apartment -- or suffering through an arduous (albeit scenic) mountain climb to the top -- I’d opt for the latter every time. Wouldn’t you?

Of course, the point here is that these kinds of “incentives” would never, ever work. Ever. Choosing to eat well and exercise is a lifestyle choice. For example, the reason Bloomberg himself proudly admits he always take the stairs is not because they’re beautifully painted or teeming with music but because he cares deeply about his own health. In other words, you can’t really end obesity in America until you first convince Americans to care about themselves. It all starts with the individual. And no government edict or incentive can change that.