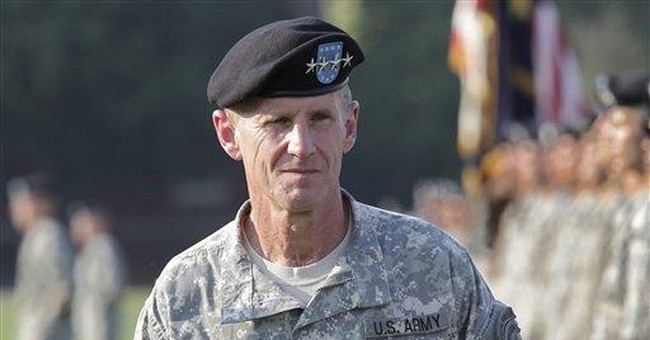 President Trump has picked his first fights of the new year with Democratic congressional leaders, and former Army Gen. Stanley McChrystal. Some could say both are justified. Democrats refuse to give the president a penny for his proposed border wall and are helping keep the government shut down for 11 days now, while over the weekend McChrystal called Trump immoral and untrustworthy.

McChrystal served in the army for 34 years, before being hired to work in the Obama administration. President Obama pressured him to resign in 2010 after his team was quoted in a Rolling Stone article criticizing Obama's cabinet members.

That was years ago now. Would the general consider taking a post in the Trump administration? Here was the exchange with ABC's Martha Raddatz on this Sunday's airing of "This Week."

"I'd say no," McChrystal replied. "It's important for me to work for people I think are basically honest, who tell the truth as best they know it."

He also has trust issues with the current president.

"I don't think he tells the truth," he said, calling Trump "immoral," to boot.

McChrystal also wondered aloud what kind of climate it was in the administration that caused former Defense Secretary James Mattis to quit so abruptly. In his resignation letter, Mattis shared his regret that he and Trump don't see eye-to-eye on many foreign policy issues, most recently Trump's decision to withdraw troops from Syria.

Judging by this tweet he posted on Tuesday, the president doesn't seem too eager to ask for McChrystal's services anyway.

As for the Democrats, he accused them of not really caring about border security.

One thing has now been proven. The Democrats do not care about Open Borders and all of the crime and drugs that Open Borders bring!