Bernie: The DNC's Latest Endorsement Is a Bad Sign for 2020 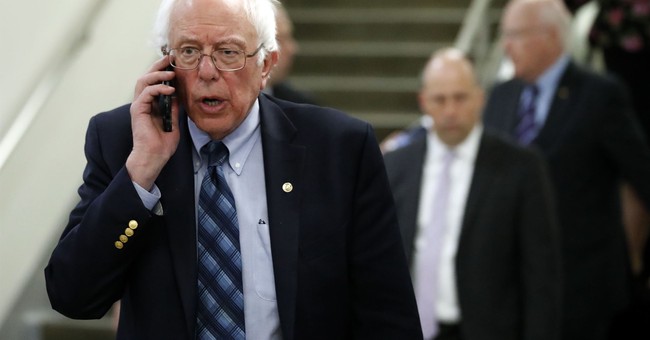 Sen. Bernie Sanders (I-VT) is one of many progressives who are peeved at the Democratic National Committee for endorsing New York Gov. Andrew Cuomo in his re-election bid for governor.

"To endorse one candidate over another is not what the chair of the DNC should be doing,” Sanders said during an event with the Washington Post.

Vice Chair Keith Ellison had praised Cuomo's primary opponent, "Sex and the City" star Cynthia Nixon, for her progressive championing, but had planned to stay out of the race.  Yet, the committee did a 180 and instructed New Yorkers to stick with Cuomo.

That "mistake" may be costly for the party come the midterms, he warned.

“New York, your home state, you were born in Brooklyn, the chairman of the DNC Tom Perez endorsed Andrew Cuomo, who is locked in a pretty competitive primary with Cynthia Nixon," the WaPo's James Hohmann noted. "Our Revolution has endorsed Cynthia Nixon. Do you think that was a mistake for the chair of the DNC?”

And, Hohmann, wondered, "does it make it harder to trust that progressive candidates in 2020 will get a fair shake when they’re wading into primaries like this?”

Sanders also made some headlines at the WaPo event for his comments on Bill Clinton. He refused to "pass judgment" on the former president after his unfortunate and defensive interview with NBC regarding his affair with Monica Lewinsky. During his contentious conversation with Craig Melvin, Clinton insisted he did not owe Lewinsky an apology for how he handled the scandal, considering he had already publicly said sorry. Several Democrats spoke out against Clinton, wondering why on Earth he took such a defensive tone. Sanders, however, was not so critical.

"I don't want to look back," Sanders said during a Washington Post event. "Times have changed."

"It has haunted that family forever," he further noted.

Sanders also commented on former Sen. Al Franken (D-MN), who resigned after some disturbing photos surfaced of him pretending to touch a woman's breasts at a USO tour. A few other women accused him of sexual assault.

"We miss him very much," Sanders said of Franken.

Yet, Congress, he said, needs to make sure women "feel safe and comfortable" at work.