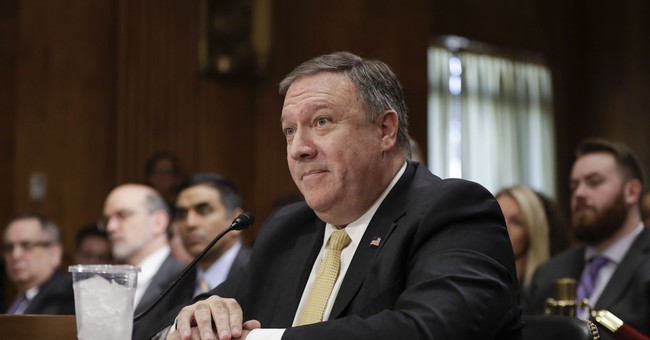 Secretary of State Mike Pompeo probably wasn't expecting to get asked about the president's tax returns at Thursday's Senate Foreign Relations Committee hearing. At the outset of the hearing, Pompeo read President Trump's statement explaining why, due to North Korea's aggressive rhetoric, the U.S. had canceled the summit in Singapore. He was prepared to answer questions about the now scrapped meeting, but he was taken aback a bit by Sen. Tom Udall's (D-NM) line of questioning.

"Given that the president refuses to disclose his tax returns, how can you assure the American people that American foreign policy is free of his personal conflicts of interest?" Udall asked.

"I find that question bizarre," the secretary of state said.

“I’ve been incredibly involved in this administration’s foreign policy for 16 months now, and I have seen literally no evidence of what you are scurrilously suggesting," he added. "It is an outrageous suggestion.”

Udall pursued the question, however, adding that he has heard "a number" of people wondering the same thing. Pompeo just laughed.

Pompeo is no stranger to getting what seem like irrelevant questions at Senate hearings. During Pompeo's confirmation hearing to become secretary of state, Sen. Cory Booker (D-NJ) thought it was an appropriate time to grill him about gay sex.

"Do you believe gay sex is a perversion, yes or no?" Booker asked. "Yes or no, sir?"

He explained that he was pressing the nominee on these issues because he is going to be "putting forward the values of our nation." Pompeo assured the senator that he would treat all employees equally - regardless of sexual orientation.