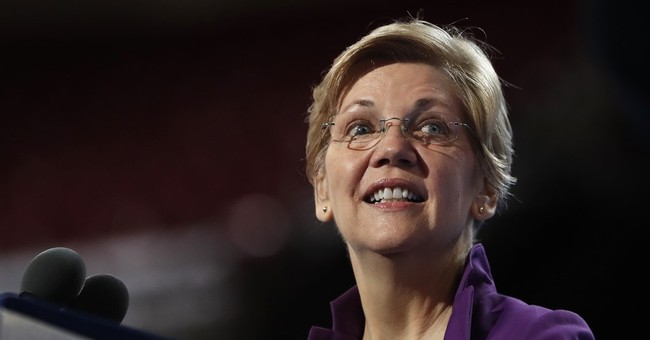 Sen. Elizabeth Warren (D-MA), one of America’s most beloved progressives, addressed the Democratic National Convention on Monday night, in what turned out to be an awkward evening of pro-Bernie Sanders supporters jeering at speaker after speaker. An hour or so before Warren took the stage, comedian Sarah Silverman and Sen. Al Franken (D-MN) got booed off the stage for chiding the disruptive attendees. “To the Bernie or Bust people, you’re being ridiculous,” Silverman said.

First Lady Michelle Obama offered temporary relief by offering a positive speech about how far America has come in providing the opportunities for African Americans and women to run for president. Her remarks were met with limited boos.

They returned when Warren stepped up to the podium.

Of course, the crowd was totally with her when she railed on GOP nominee Donald Trump. “What kind of a man” cheats students, cheats investors, etc. she asked.

She had an answer: “A man who must never be president of the United States.”

She lost the audience when she backed up that remark by noting “Hillary Clinton and Tim Kaine are going to make it happen." Some of her former fans even shouted "We trusted you!"

Warren also offered what she says is a clear contrast between Democrats and Republicans on key issues. For instance, "while Democrats proposed raising minimum wage, Republicans said no."

“This November, the American people are coming for you,” she told the GOP.

That’s when she offered a bit of irony.

If Warren wants to talk about rigged systems, she should comb through the new Wikileaks emails exposing the DNC’s bias against the Sanders campaign. The correspondence between DNC Chair Debbie Wasserman Schultz and her staff proves that there was open hostility to Sanders, suggesting no one was going to stop them from making sure Hillary Clinton is the Democratic nominee.

Of course, that wasn't the only ironic line in Warren's speech.