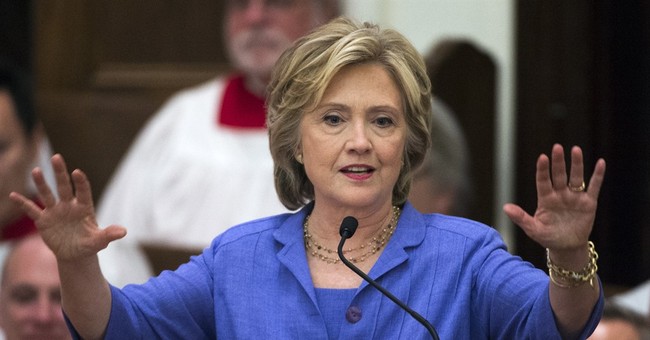 When 1,000 voters were asked if former Secretary of State and presidential candidate Hillary Clinton broke the law by using a private server to handle classified information, nearly 60 percent said "yes."

Fifty-nine percent (59%) of Likely U.S. Voters think it’s likely Clinton broke the law by sending and receiving e-mails containing classified information through a private e-mail server while serving as secretary of State. A new Rasmussen Reports national telephone survey finds that just 34% believe Clinton is unlikely to have done anything illegal. This includes 42% who say it is Very Likely Clinton broke the law and only 15% who think it’s Not At All Likely.

What's worse, a sizable number of Democrats believe her to be guilty.

Even among her fellow Democrats, 37% think it’s likely Clinton broke the law while using the private e-mail server at the State Department, with 16% who say it’s Very Likely.

Oh yeah, and just about everyone else, too.

Men and those 40 and over are more likely to think Clinton broke the law than women and younger voters are.

But most voters in nearly every demographic group say Clinton is likely to have broken the law.

These findings should make the Clinton camp shudder. Why would Americans vote for someone they don't trust?

Clinton perhaps fooled the public into thinking she was being accountable for her actions by handing her emails back to the State Department, but a new report revealed that there is a five-month gap in the document dump her staff reluctantly provided.

I think it's time to take that survey again.