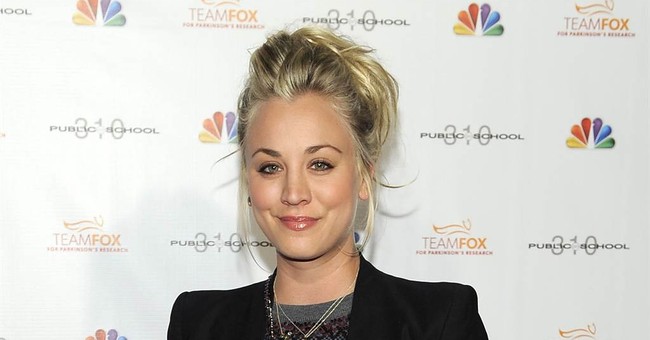 Another celebrity has rejected the term ‘feminist,’ so she is predictably being judged by radical feminists.

In a new interview with Redbook magazine, Kaley Cuoco-Sweeting, one of the stars of The Big Bang Theory and former star of 8 Simple Rules for Dating My Teenage Daughter, revealed how she feels about feminism:

Is it bad if I say no? It’s not really something I think about. Things are different now, and I know a lot of the work that paved the way for women happened before I was around ... I was never that feminist girl demanding equality, but maybe that's because I've never really faced inequality."

This is certainly true of her career. Twitchy reports that Cuoco-Sweeting receives the same salary as her male costars.

Cuoco-Sweeting also commented on how much she enjoys performing domestic duties for her husband, Ryan Sweeting:

“I cook for Ryan five nights a week: It makes me feel like a housewife; I love that. I know it sounds old-fashioned, but I like the idea of women taking care of their men. I'm so in control of my work that I like coming home and serving him. "My mom was like that, so I think it kind of rubbed off."

The word ‘serve’ really set feminists off. As a result of these comments, feminists launched at her on social media. Twitter users, for instance, insisted she was ‘selfish,’ and needed to ‘get educated.’

So much for her having a mind of her own.

Cuoco-Sweeting has a right to voice her opinion and all that feminist backlash against her accomplishments is exposing their own hypocrisy. Instead of tearing down women for their choice to stay home, they should be supporting them. Isn't that what girl power is all about?

I, for one, will be getting my hands on the new issue of Redbook magazine.

Update: Citing the backlash, Cuoco-Sweeting felt compelled to apologize for her comments, saying they were 'taken out of context.' Don't succumb to bullying, Kaley!