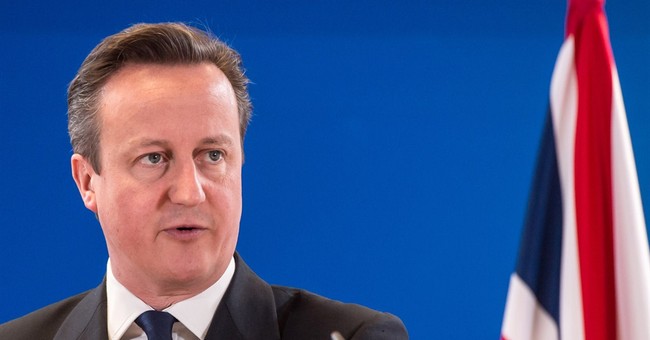 Unlike someone we know, it sounds like United Kingdom Prime Minister David Cameron has a strategy for defeating Islamic extremists. At a press conference today on the growing threat of ISIS, Cameron offered a passionate speech with plans to disrupt the terror group. Just a glimpse at his comments proves he knows exactly who we’re dealing with:

“The threat we face today comes from the poisonous narrative of Islamist extremism.”

“The terrorist threat was not created by the Iraq war ten years ago. It existed even before the horrific attacks on 9/11."

“This threat cannot be solved simply by dealing with the perceived grievances over Western foreign policy."

"We cannot appease this ideology. We have to confront it at home and abroad."

Thankfully, Cameron is more than a speech maker. In addition to announcing the UK was raising the terror threat level from “substantial” to “severe," Cameron said they will introduce new laws to fights terrorists and seize passports from terror suspects. He plans to offer more details on the UK's plans in a few days:

On Monday, I will speak in the House on the measures we're taking to defeat extremism, protect our way of life and keep all our people safe.

The prime minister's comments were a clear contrast from our commander-in-chief’s response to the growing threat of ISIS militants at a Thursday press conference. President Obama acknowledged the threat of the extremist group, yet stated the US does not yet have a strategy to confront it. Numerous lawmakers and analysts criticized his comments as weak. Following Cameron’s speech, however, a number of pundits were clearly impressed:

Can we borrow David Cameron? He fights.

Obama: It's "unrealistic" to defeat ISIS,and we don't have a strategy anyway. Cameron: It won't be quick, but we will defeat them. #Contrast

Barack Obama to speak at 3 pm to urge David Cameron to take it down a notch.

You know it's a good speech when people are talking more about the content of his speech than his tan suit. While Obama seems more interested in golfing, Cameron is taking serious steps to combat this very dangerous organization.