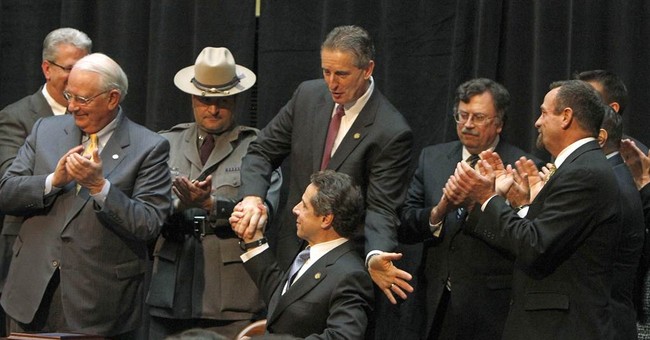 Governor Andrew Cuomo’s SAFE Act continues to anger gun owners in the state of New York. The legislation , which banned the sale of AR-15 semiautomatic rifles, among other restrictions, has resulted in almost 1,200 felonies. Now, it seems legislators are taking their discontent with the law a step further:

Counties have begun passing resolutions denying New York state the right to use their county seal, logo, name, etc from being used in conjunction with SAFE act related letters or other messages (for example pistol permit renewals). This is a method to show continued resistance and to prevent county residents from thinking their county endorses the so called SAFE act in any way.

For instance, here is language from the Allegany County resolution denying New York the use of their county seal:

The Allegany County Board of Legislators denies the State of New York permission to use the name, letterhead, address or seal of the County of Allegany, Allegany County Sheriff or Allegany County Clerk for purposes of correspondence with legal and registered gun owners regarding permit recertification or for any other purpose associated with the SAFE Act.

Legislators are making this move against the state, they say, to prevent being ‘misrepresented’ by communication. Here’s a full list of the other counties refusing to let New York use their seal on SAFE Act papers:

One can’t blame these counties for refusing to lend their symbol to legislation with which they disagree. With Cuomo’s SAFE Act and his recent comments alienating “extreme conservatives,” the governor seems to be having a hard time making friends these days.