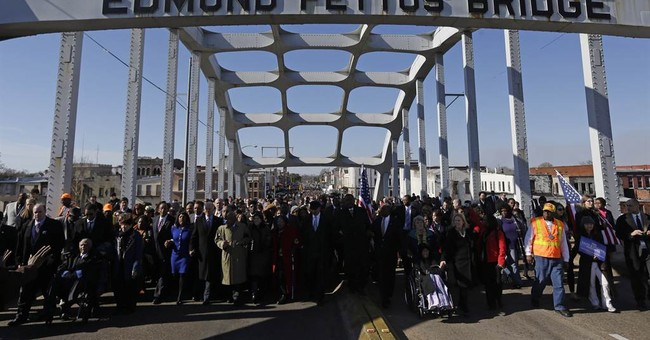 President Obama invoked the "spirit of Selma" to justify his executive amnesty policies Friday in an interview with Sirius XM’s Joe Madison.

"The notion that some kid that was brought here when he was two or three years old might somehow be deported at the age of 20 or 25 even though they’ve grown up as American, that's not who we are," Obama said.

But while granting amnesty to select illegal immigrants may be inclusive, it is the exact opposite of "an America where everybody was equal under the law."

Just look at Obama's own example of "some kid that was brought here when he was two or three years old" who we should not deport now that they are "20 or 25."

By what logic should we grant amnesty to an illegal immigrant that came here when he was 15 but deny it to one who came when he was 18?

Amnesty is all about drawing arbitrary lines that by definition treat people very unequally under the law.

Hi, Mr. President. I’m a DREAMer from Arizona, the state where Sheriff Arpaio and ICE usually criminalize our communities. And my sister is here who actually qualifies for DACA extended, or would have qualified if it was implemented. And my mom is also here. She was, unfortunately, left out of your executive actions and she doesn’t have any citizen children; she only has DREAMers as children. And she is also in deportation proceedings. And because of a previous deportation that she did have and came back for us, she’s actually a priority in your deportation directive.

Obama claims it is because he is not legally allowed to do give temporary legalization benefits to both. But that is a lie. There is no law, regulation, or court case anywhere that says parents of children born in the United States are entitled to stay in the country but parents who brought their children with them are not. Obama made that arbitrary distinction up out of thin air.

Nobody likes deporting people. And perhaps deportations are an action that should be reserved for just criminals and national security threats.

But that is not the policy change that Obama and other amnesty activists have been pushing for decades. At least not openly. The policies that Obama and amnesty activists say they want would treat people very differently based on arbitrary factors like when they arrived in the country or why they came here. The chosen will get to stay and will be put on a path to citizenship. Everyone else, supposedly, would then be deported.

How is that in the "spirit of Selma"?