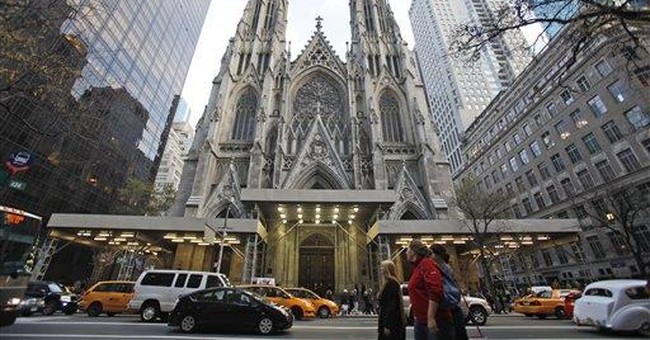 Yesterday, Judge Brian Cogan of the United States District Court for the Eastern District of New York, not only struck down Obamacare's contraception mandate as applied to religious non-profit organizations, but also sent a strong signal that federal courts were losing patience with President Obama's many stitches of executive power.

Previous courts had ruled against President Obama's contraception mandate as applied to for-profit entities (see Sebelius v Hobby Lobby), but this was the first court to hold that participating in Obama's scheme to provide free birth control is a substantial burden on the free practice of religion (specifically the Catholic Archdiocese of New York and its affiliate organizations).

The contraception mandate "directly compels plaintiffs, through the threat of onerous penalties, to undertake actions that their religion forbids," Cogan wrote. "There is no way that a court can, or should, determine that a coerced violation of conscience is of insufficient quantum to merit constitutional protection."

Cogan forcefully rejected three key Obama defenses of the mandate. First, on the government's claim that there was a compelling interest in uniform enforcement of the contraception mandate, Cogan wrote:

Tens of millions of people are exempt from the Mandate, under exemptions for grandfathered health plans, small businesses, and “religious employers” like the Diocesan plaintiffs here. Millions of women thus will not receive contraceptive coverage without cost-sharing through the Mandate. Having granted so many exemptions already, the Government cannot show a compelling interest in denying one to these plaintiffs.

Here, the Government implicitly acknowledges that applying the Mandate to plaintiffs may in fact do nothing at all to expand contraceptive coverage, because plaintiffs’ TPAs aren’t actually required to do anything after receiving the self-certification. In other words, the Mandate forces plaintiffs to fill out a form which, though it violates their religious beliefs, may ultimately serve no purpose whatsoever. A law that is totally ineffective cannot serve a compelling interest.

Finally, the court also rejected the government's argument that Obama's failure to convince Congress to "fix" Obamacare authorized him to enforce his contraception mandate in the manner he did:

Nor is the Mandate the least restrictive means by which the Government can improve public health and equalize women’s access to healthcare. ... The Government could provide the contraceptive services or insurance coverage directly to plaintiffs’ employees, or work with third parties – be it insurers, health care providers, drug manufacturers, or non-profits – to do so without requiring plaintiffs’ active participation.
...

The Government first argues that the alternatives above are infeasible because the defendants lack statutory authority to enact some of them. This argument makes no sense; in any challenge to the constitutionality of a federal law, the question is whether the federal government could adopt a less restrictive means, not any particular branch within it. It would set a dangerous precedent to hold that if the Executive Branch cannot act unilaterally, then there is no alternative solution. If defendants lack the required statutory authority, Congress may pass appropriate legislation.

Considering how often Obama has justified his expansion of executive power on Congress' failure to do his bidding, yesterday's ruling was not only a huge victory for religious liberty, but a huge win for limited government in all spheres as well.