McDonald's To Install Ordering Kiosks Instead Of Paying People $15/Hour 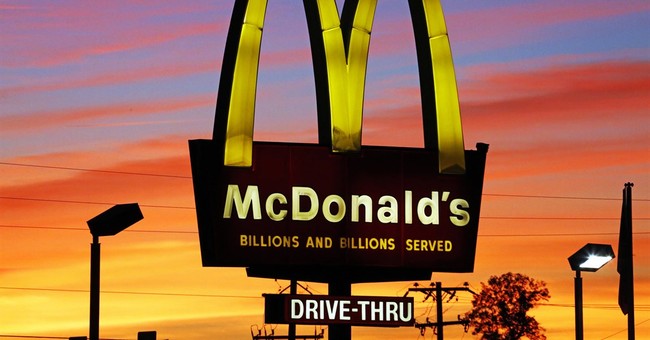 Let’s start with automation. In 2013, when the Fight for $15 was still in its growth stage, I and others warned that union demands for a much higher minimum wage would force businesses with small profit margins to replace full-service employees with costly investments in self-service alternatives. At the time, labor groups accused business owners of crying wolf. It turns out the wolf was real.

Earlier this month, McDonald’s announced the nationwide roll-out of touchscreen self-service kiosks. In a video the company released to showcase the new customer experience, it’s striking to see employees who once would have managed a cash register now reduced to monitoring a customer’s choices at an iPad-style kiosk.

Personally, I have mixed feelings about a kiosk at McDonald's. As someone who eats at McDonald's more frequently than I'd like to admit, I like the idea of being in control of my own order and ensuring that it is entered correctly into the system. However, I recognize that for many people (myself included), their first jobs are at fast-food establishments. These jobs are important for building an employment foundation, and they could be going away due to it simply being financially unwise to hire someone at a higher wage than they are worth. People who would only be employable (at least, initially) at a place like McDonald's or Walmart (full disclosure: I worked at one for a total of six months during college) would not be hired due to the need to have a more selective application process due to the higher cost of labor. These are facts, and they don't bode well for the lower-skilled economy.