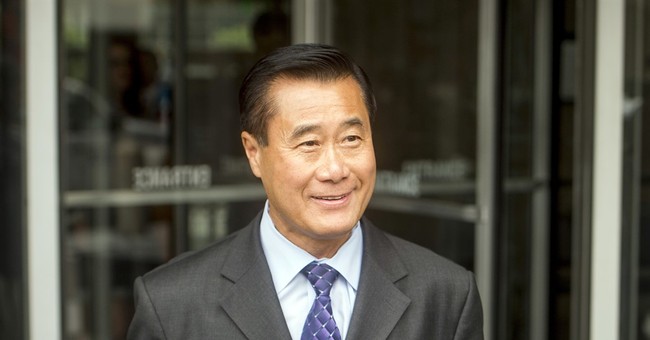 In 2014, California State Senator Leland Yee (D) was arrested on corruption charges after he attempted to make a deal with an undercover agent to purchase shoulder-fired missiles from Islamic rebels in the Philippines.

And that's how prosecutors say Yee ended up sitting across from an undercover federal agent in a coffee shop in early March, brokering what he was told was a $2 million arms deal that would include the purchase of shoulder-fired missiles from Islamic rebels in the Philippines.

While this alone would be shocking enough, the fact that Yee had been a prominent gun control advocate, and sponsored multiple anti-gun bills throughout his time in the Senate, made the allegations all the more shocking. (And a somewhat delicious irony.)

On Thursday, Lee and his fellow conspirators were sentenced to five years in prison. A request for leniency in light of his public service was denied by the judge.

Former state Sen. Leland Yee was sentenced by a federal judge in San Francisco today to five years in prison for his political corruption conviction.

Yee, 67, and Jackson, 51, pleaded guilty before Breyer on July 1 to one count of participating in a racketeering conspiracy to solicit bribes in the form of campaign contributions in exchange for political favors by Yee.

They admitted that Yee received more than $40,000 in such payments, funneled to him by Jackson, and also admitted to plotting in a never-completed international arms deal in which weapons would be smuggled from the Philippines.

On Reddit, commenters noted how Yee once publicly fought against the video game Grand Theft Auto--"probably because he lived it."