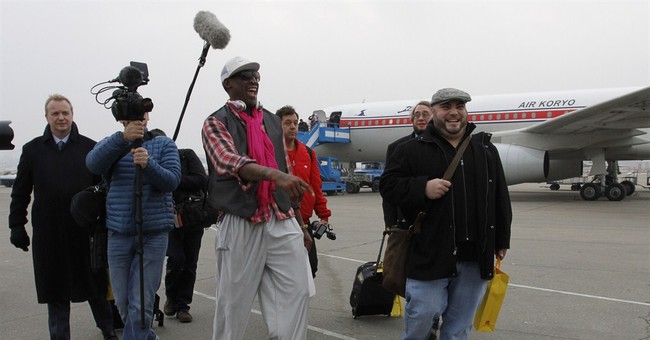 Congrads @dennisrodman on your diplomacy efforts in North Korea. It might be dark but you are a light!


Rodman had previously stated that he loved Kim Jong-un, the North Korean dictator, calling him a "good guy" and a "friend." Kim Jong-un made headlines recently for executing his own uncle. Earlier this year, Kim Jong-un said that Switzerland was committing a human rights abuse for refusing to sell North Korea ski lifts.

North Korea has a system of labor camps that imprison thousands of citizens. Rodman has made four trips to North Korea.

Rodman's trips certainly are weird, and they're not anything worthy of praise. Kim Jong-un is not a "good guy" by any standard.

UPDATE: It appears that Jackson has deleted his first tweet, offering "congrads" to Rodman.