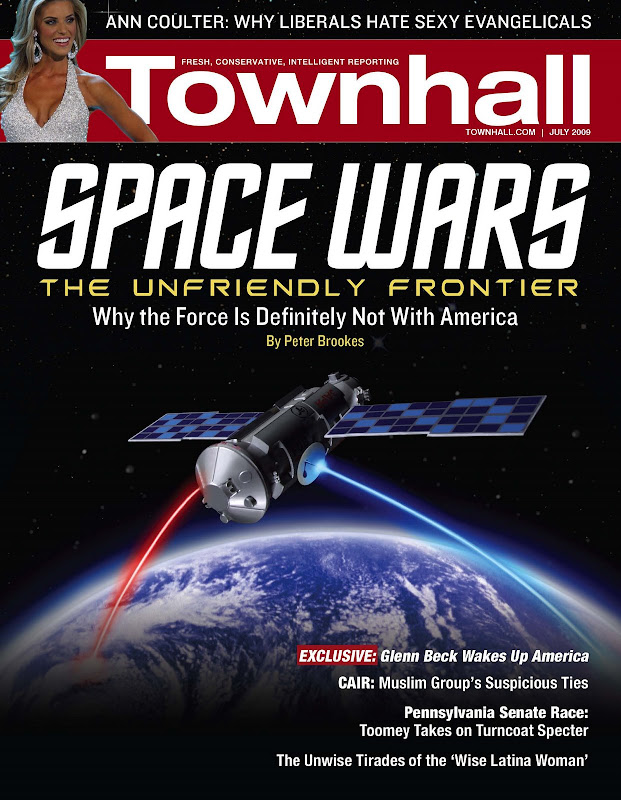 Subscribers are raving about the powerful July issue of Townhall magazine. (What, you’re not a subscriber? Well, fix that problem here.) It’s an exciting issue that tackles more of what you care about:*Our cover feature offers a powerful and compelling look at a growing problem facing our national security—space—and what we can do to solve it. *Robert Spencer exposes the sinister ties of the nation’s leading Muslim organization.*Robert Novak protege Timothy Carney takes an in-depth look at the likely 2010 showdown between Arlen Specter and Pat Toomey and what it could signal for a possible GOP revival.*And if you’ve noticed a seriously secular shift in America’s colleges and universities that were founded on religious principles, you’re not alone—we detail what’s happening.If you’re not a subscriber, you’re missing out. Here’s a closer look at what July is packing—and what you can read if you order today. And we’ll throw in a FREE COPY of the new best seller “Glenn Beck’s Common Sense.”
*** 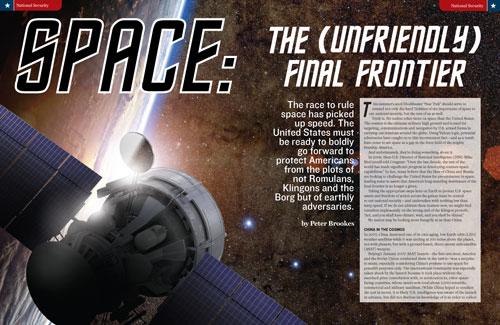 Our cover feature by regular contributor Peter Brookes, “Space: The (Unfriendly) Final Frontier,” reveals a serious area of our national security that is often neglected by the American media but is being exploited by those wishing to dominate us—and tells what we can do about it.

The race to rule space has picked up speed. The United States must be ready to boldly go forward to protect Americans from the plots of not Romulans, Klingons and the Borg but of earthly adversaries . . .This summer’s sci-fi blockbuster, “Star Trek,” should serve to remind not only die-hard Trekkies of the importance of space to our national security, but the rest of us as well.Truth is: No nation relies more on space than the United States. The cosmos is the ultimate military high ground and is used for targeting, communications and navigation by U.S. armed forces in carrying out missions around the globe. Potential adversaries have caught on to this inconvenient fact—and as a result have come to see space as a gap in the force field of the mighty Starship America.And, unfortunately, they’re doing something about it. 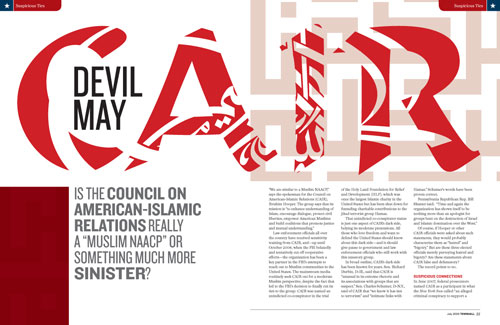 Is the Council on American-Islamic Relations really a “Muslim NAACP” or something much more sinister?In “Devil May CAIR,” Jihad Watch director Robert Spencer lays out the history of CAIR, the organization’s convicted criminal employees, and its suspicious ties to terror-sponsoring organizations.

CAIR has insisted that its former employees and board members who are now doing hard time for terrorism charges were not employed with CAIR when they were involved in their illegal activities and that the organization can’t possibly be held responsible for everything done by anyone who was ever connected with the organization.Very well. One inevitably wonders in that case, however, how these men got their jobs in the first place. If CAIR is a moderate group that abhors all jihad violence, how did those former CAIR employees who are now in prison get through the interviewing process? The Islamic world is engulfed in an immense international upheaval, with millions of jihadists claiming to represent “true Islam” and recruiting among peaceful Muslims on that basis, and somehow that subject never came up when CAIR officials were getting to know Randall Royer or Bassam Khafagi or Rabih Haddad? 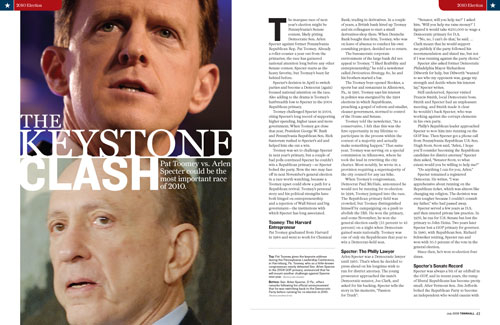 “The Keystone Clash” by Tim Carney shows why Pat Toomey vs. Arlen Specter could be the most important race of 2010—and maybe even of the next decade.

Toomey was set to challenge Specter in next year’s primary, but a couple of bad polls convinced Specter he couldn’t win a Republican primary—so Specter bolted the party. Now the two may face off in next November’s general election in a race worth watching, because a Toomey upset could show a path for a Republican revival. Toomey’s personal story and his political strengths have both hinged on entrepreneurship and a rejection of Wall Street and big government—the institutions with which Specter has long associated. 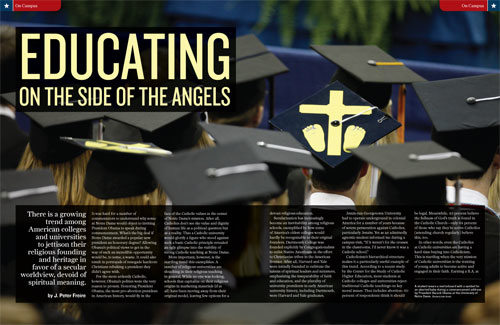 There is a growing trend among American colleges and universities to jettison their religious founding and heritage in favor of a secular worldview, devoid of spiritual meaning.What happened? What’s to be done? J. Peter Freire offers answers in “Educating on the Side of the Angels.”

Secularization has increasingly become an inevitability among religious schools, exemplified by how some of America’s oldest colleges would hardly be recognizable to their original founders. Dartmouth College was founded explicitly by Congregationalists to enlist Native Americans in the effort to Christianize tribes in the American frontier. After all, Harvard and Yale were initially founded to cultivate the talents of spiritual leaders and ministers, emphasizing the inseparability of faith and education, and the plurality of university presidents in early American university history, including Dartmouth, were Harvard and Yale graduates.Jesuit-run Georgetown University had to operate underground in colonial America for a number of years because of severe persecution against Catholics, particularly Jesuits. Yet as an admittedly agnostic student informed me during a campus visit, “If it weren’t for the crosses in the classrooms, I’d never know it was a Catholic school.”

*EXCLUSIVE: Glenn Beck wakes up America*The unwise tirades of the “wise Latina woman”*Justice Antonin Scalia on the importance of the Constitution*Newt Gingrich on how to educate Americans about our timeless principles*Ann Coulter on why liberals hate sexy evangelicals*North Korea tests the world*Cheney trumps Pelosi*Denis Leary thinks Barack is the greatest—ever*A Brit smacks WH Press Secretary Robert Gibbs*Up close and personal with S.E. Cupp*Mary Katharine Ham blasts Obama’s and the Left’s moral relativism*Scott O’Grady puts it on the line . . . again*The massive costs of Obama’s health care plot. . . And much more.

Darkness at Dune: The Nightmare of Martha's Vineyard
Townhall
Matthew Foldi does the Walker-obsessed MSM's job for them and airs out Raphael Warnock's own truckload of dirty laundry
Twitchy
Biden Drops a Whopper About DeSantis and a Mafia-Like Comment That Has People Talking
Redstate
5 Years After Las Vegas Concert Shooting, an FBI Whistleblower Reveals Probable Motive
PJ Media