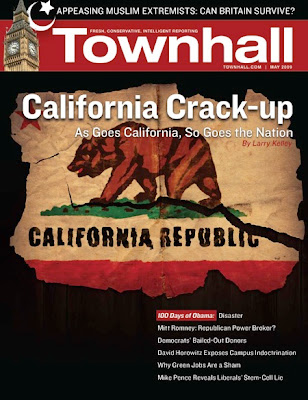 The May issue of Townhall magazine has been in readers’ homes for two or three weeks now and is getting a lot of attention. We have a blistering report on the disaster that is California and how America is doomed to the same fate if we don’t change our ways. There’s also a piece from London’s Tim Montgomerie of ConservativeHome.com detailing the problems the UK is facing in its appeasement of Muslim extremists. We also offer readers exclusive analysis of Obama’s first 100 days, as well as a profile of Mitt Romney and the GOP’s search for a leader. For those of you who are not subscribers to the magazine and therefore haven’t had the chance to enjoy the May issue yet, here’s a little taste of what you’re missing. And then order your subscription to Townhall magazine and pick your FREE book. 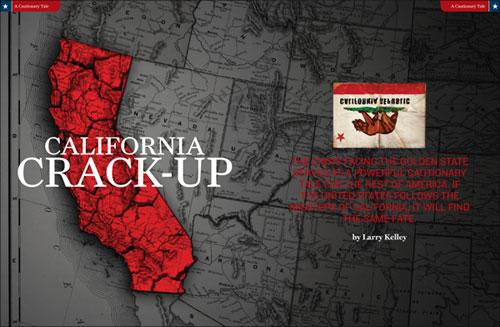 In “California Crack-up,” Larry Kelley, a California writer who has contributed several pieces for Townhall, takes a look at the crisis facing the Golden State that serves as a powerful cautionary tale for the rest of America. Much of President Obama’s liberal agenda is already underway in California, and if the United States follows the state’s missteps, it will find the same fate. From the report:

While Karl Marx believed that socialism—and ultimately communism—would replace capitalism as the morally superior societal system, it was Margaret Thatcher who observed, “The trouble with socialism is that it always runs out of other people’s money.” Now, after 50 years of steady indoctrination by California’s media and education establishments, acquiescence to the soft tyranny of socialism dominates the culture, business climate and legislature. A byproduct of this is California’s massive government spending machine, where wealth redistribution is the organizing principle. Despite being home to the eighth-largest economy in the world, California is also teetering on insolvency. ...... California, for most of the last century, when it gave birth to the movie industry and later became a television industry capital, has led the nation in setting new trends. It has long been a place where new cultural phenomena were born and rapidly spread across the country. The vital question that needs an answer is this: Will California’s balkanized culture, fiscal insolvency and devotion to Marx be harbingers for the now all Democrat-controlled federal government? Will the nation become what California already is? 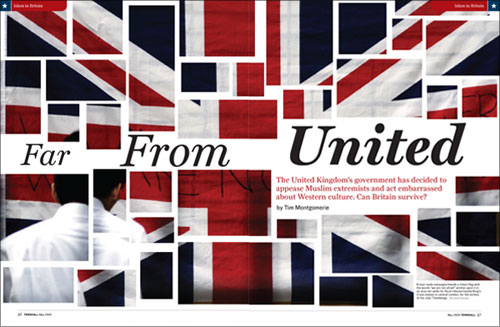 Tim Montgomerie, in “Far From United,” offers analysis of Britain’s current efforts (or lack thereof) in dealing with radical Islam within its borders. The UK government has decided to appease Muslim extremists and to act embarrassed about Western culture. Can Britain survive?

When soldiers from Britain’s Royal Anglians recently returned from a tour of duty in Iraq, they were given a homecoming parade by the southern English town of Luton. The vast majority of the local people greeted the troops with cheers, smiles and flowers. But a day of thanksgiving was overshadowed by the loud protests of a group of Islamic extremists. Holding up placards, they accused Britain’s heroic soldiers of being “butchers,” “war criminals,” “murderers” and “baby killers.” By granting the Muslim protestors a right to insult the soldiers, the police were risking a breach of the peace—and a breach of the peace did occur. But Britain’s police service always appears eager to bend over backwards for a militant minority within the Muslim population.If the British state is ready to give the Muslim community the benefit of the doubt when it comes to free speech, it is just as ready to surrender the same principle when Muslim leaders demand. Prime Minister Gordon Brown’s government banned Dutch parliamentarian Geert Wilders from entering Britain in February. The ban followed threats from Islamic Web sites to mobilize a protest mob if Wilders was granted the right to deliver his warning that Islam is an intrinsically violent religion. 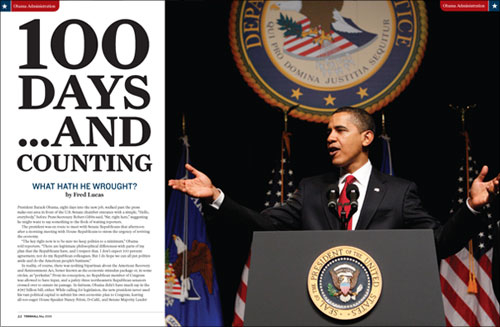 In Townhall’s special feature on the Obama administration, “100 Days … And Counting,” CNSNews.com’s Fred Lucas digs into the White House’s actions and agenda. Just how much further Left will they go? And what could their moves mean for the nation?
*** 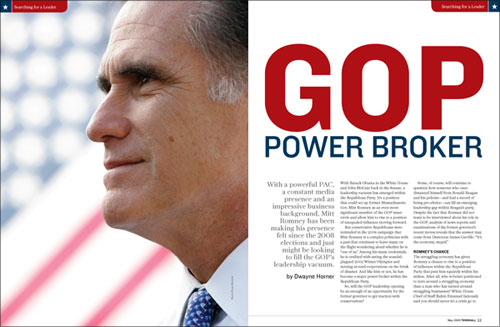 In “GOP Power Broker,” Dwayne Horner takes a look at Mitt Romney’s moves that indicate the former Massachusetts governor might just be looking to make a move. With a powerful PAC, a constant media presence and an impressive business background, Romney has been making his presence felt since the 2008 elections and could shoot to fill the Republican Party’s leadership vacuum. But he has a lot of baggage--some of which is of his own making, some of which is of his oppenents' making--that he will have to take care of before much of the GOP base will back him.
***
Also in the May issue:

*Taking a page from ACORN’s playbook*Bon Jovi’s love note to Barack*Mary Katharine Ham asks: How did our self-important rookie president come to prance around Europe apologizing for America?*Exposed: The Democrats’ and environmentalists’ latest sham—green jobs*Gold Star Moms put their pain to work*Toomey and Specter throw down*David Horowitz on more liberal indoctrination on campus*Rep. Mike Pence calls out the Left on the truth about stem cells*A pop quiz on Obama nominees*Fred Thompson on the coming court fights

Subscribe to Townhall magazine today and pick your FREE book.