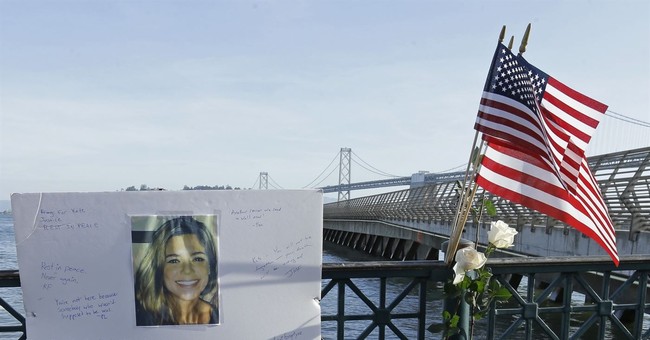 Seattle-area authorities refuse to work with ICE, and their residents keep getting murdered.

An MS-13 gang member, Carlos Orlando Iraheta-Vega, used a baseball bat to bash his 16-year-old friend’s head in before using a machete to hack the boy’s body into pieces.

“Police say Mr. Iraheta-Vega, 20, admitted to the killing, saying he’d arranged to fight Juan Carlos but somewhere along the way he and a fellow MS-13 confederate, nicknamed ‘Inferno,’ decided to kill him instead,” according to The Washington Times.

“U.S. Immigration and Customs Enforcement says if local authorities had cooperated with them, Mr. Iraheta-Vega — who goes by the name nickname 'Joker' — could have been deported long ago, after an arrest last November. But King County refused to notify ICE that Mr. Iraheta-Vega was being released from jail, and instead freed him into the community. He would have more run-ins with the law, each time escaping ICE’s clutches, until his arrest last week on suspicion of murder.”

Just days earlier, an illegal immigrant Carlos Daniel Carillo-Lopez, was arrested for allegedly killing a teenager whose girlfriend had posted photos of herself flashing rival gang signs (via The Washington Times):

In the case of Mr. Carillo-Lopez, police say he was part of a group of Surenos gang members who went looking to fight a boy who had been a friend. They feuded after the boy’s girlfriend posted photos online suggesting fealty to the rival 18th Street gang. ICE said Mr. Carillo-Lopez had multiple run-ins with police, both before and after the April murder he now stands accused of, yet each time local authorities refused requests to notify deportation agents of his release. In Mr. Iraheta-Lopez’s case, he was arrested by the Kent Police Department on Nov. 8 for stealing a car and ICE placed a detainer request on him. It was ignored.”

After his release, Carillo-Lopez was arrested two more times for driving under the influence.

As the Washington Times notes, “Both Mr. Iraheta-Vega and Mr. Carillo-Lopez snuck into the U.S. as juveniles and were deemed Unaccompanied Alien Children (UAC), which qualified them for lenient treatment under American law, earning quick release to sponsors in the community. Both made their way to the Seattle area where, police say, they hooked up with transnational criminal gangs that increasingly rely on illegal immigrant teens to boost their ranks. They built their own criminal records, all while being shielded from deportation by liberal local governments’ non-cooperation policies.”

“King County’s willful refusal of ICE warrants only protects those who harm the community,” Nathalie Asher, director of removal operations at ICE’s Seattle field office, told the Times. The Seattle area should serve as a warning for other cities, but the D.C. City Council recently voted unanimously to adopt a sanctuary-city policy for itself.

Since cities cannot be counted on to properly deal with violent, illegal aliens and safeguard their residents, all the more reason the Trump administration has to stop them at the border.