Trump Campaign to the Media: Here's Actual Proof of Voter Fraud, Just as You Asked 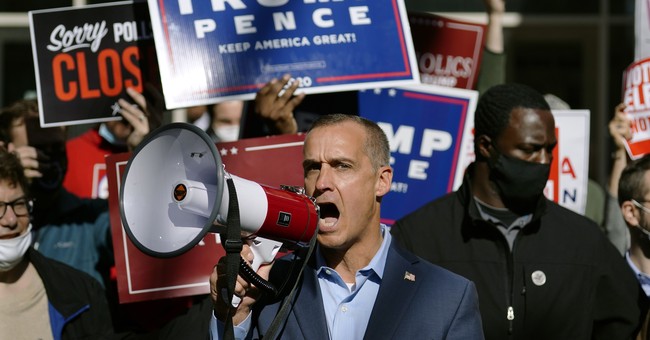 While the mainstream media was doing a victory lap for former Vice President Joe Biden and Sen. Kamala Harris (D-CA), the Trump campaign held a press conference about voter fraud in Pennsylvania.

"Let me just give you one concrete example, not anecdotal, but concrete example of what we believe to be valid voted fraud in the State of Pennsylvania," Trump campaign senior adviser Corey Lewandowski said during Saturday's press conference. "I draw you to the attention of an obituary listed for Denise [inaudible] of Allegheny County. Born 9/10/1946, deceased 10/22/2020. Her application to vote was received on 10/23, the day after she died. It was then mailed by the county back to her on 10/24/2022, two days after she had legally passed away and then the ballot was received back at the county office on November 2nd, 2020 and when you go to the Secretary of State's website today, it says that she voted in this election, effective November 2nd 2020, a full nine days after ... passed away."

According to Lewandowski, the media needs to "do their job" and dig deeper to find additional examples.

.@CLewandowski_ on what the Trump campaign believes is a concrete example of voter fraud in #Pennsylvania pic.twitter.com/psBS06Vw5F

"Joe continues to vote. If I recall correctly, Joe was a Republican, so maybe I shouldn't complain," Giuliani said sarcastically. "But we should go see if Joe is voting Republican or Democrat now from the grave."

"Also, Will Smith's father has voted here twice since he died. I don't know how he votes since he's always voted secret," he said. "In Philadelphia, they keep the votes of dead people secret. At least that is something you can be commended for."

Poll watcher in #Philadelphia: What I saw was disturbing, they did it so we couldn’t observe or challenge it pic.twitter.com/P4WxvOdZYr

Lisette Tarragano from #Philadelphia: We should all be concerned, we are being constrained pic.twitter.com/VQR6XeAndc

Despite multiple members of the press saying they need more "evidence" of what's taking place, these instances are being ignored. Same thing goes for United States Postal Service whistleblowers who have stepped forward to say postmasters are backdating the dates ballots were received. A USPS whistleblower revealed his identity on Friday after higher-ups saw his Thursday interview with Project Veritas. According to Richard Hopkins, a carrier in Erie, Pennsylvania, his supervisors and others above him were ordering carriers to backdate ballots that were received after Election Day.

There have been a string of USPS whistleblower cases that Project Veritas has made public. Project Veritas released their first video of a United States Postal Service worker in Traverse City, Michigan, coming forward to expose their supervisor, Johnathan Clarke, potentially engaging in voter fraud. The second video released Thursday afternoon allegedly shows a USPS worker in Las Vegas, Nevada, talking about handing over a "handful" of ballots to an undercover journalist. The blank ballots were collected because they were allegedly sent to the wrong address. The third video was Hopkins' original report. Video number four was of a USPS whistleblower in Coraopolis, Pennsylvania who claimed supervisors and other higher-ups are ordering carriers to backdate ballots that were received after Election Day.