Sen. Tom Cotton: We Have To Be Willing To Go To War 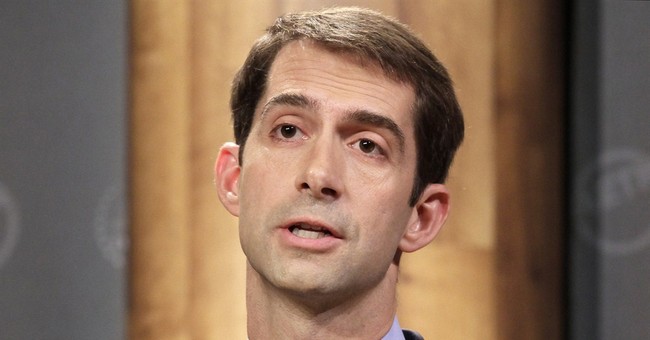 If America wants to defeat ISIS, the U.S. millitary must demonstrate itself to be a foreboding enemy, Sen. Tom Cotton (R-AR) and Rep. Ryan Zinke (R-MT) explained at a panel at the Conservative Political Action Conference on Thursday.

“Air operations alone will not defeat ISIS,” Zinke said. “I've been there. ISIS is evil. You're not going to reform a group that beheads children, or burns pilots in cages. They're not reformable. And ISIS is as much a battle within Islam as it is between the East and west. We have a duty to fight ISIS.”

Zinke, a retired Navy SEAL Commander and member of the House Armed Services committee, agreed that the current strategy against Islamic extremism in the middle east has not been successful.

“I think the American public is tough, but we deserve the truth,” he said. “We won't be able to win against this enemy if we conduct it from over the horizon.”

Though Zinke commented that he wouldn't have chosen to go into Iraq given what is now known, he believes that only a military operation with full support – including medivac and air support – will truly remove the threat of the terrorist group.

“America is a force for global order because we're the only global power, and have been since the beginning of our country,” Cotton said. “The alternative is not perpetual peace and stability. Without America the alternative is disorder and chaos.”

For the millitary to truly be formidible, it requires both funding and support from the government and the people. Right now, Cotton said, the millitary lacks the funding it needs to win a war.

“Too many people think our current president is not willing to fight a war to protect our interests, which are protecting our territory, defending the lives of our citizens, standing up for our allies, and protecting our commercial interest around the world,” said Cotton, who served in Iraq as an Army Ranger.

The decline of America as a strong military power has not only caused a threat to nataional security, but is a contributor to global instability, according to Cotton. This disorder has grown and festered in the Middle East during the current administration.