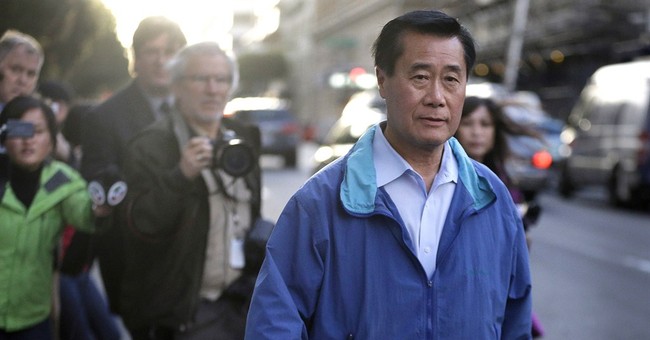 In the May issue of Townhall Magazine, where this column originally appeared, Mary Katharine Ham discusses three explosive scandals the media could cover if they weren't happening to Democrats.

A suspected arms dealer, an allegedly crooked mayor dealing in White House access, and a cowardly attorney general walk into a bar. Even if it’s the bar right next door to The Washington Post, would they get any coverage? If they’re Democrats, the answer is probably no.

You know the old story. A national me- dia once obsessed with the “local crime story” of the Trayvon Martin case is suddenly reticent about abortion doctor and convicted murderer Kermit Gosnell, because it was a “local crime story,” as The Washington Post health reporter Sarah Kliff called it. A national media once obsessed with state Sen. Wendy Davis of Texas is suddenly reticent about a state senator in California allegedly selling rocket launchers to foreign terrorists because they don’t do state senator stories, according to a CNN Twitter account.

A national media usually obsessed with political hypocrisy has not a thing to say about a one-time Brady Campaign for the Prevention of Gun Violence honoree being arrested for allegedly doing some serious gun running. State Sen. Leland Yee of San Francisco, who was also the frontrunner for California secretary of state, is described in an indictment as taking payment for political favors, bragging about connections to arms purchasers, and calling himself “agnostic” about getting weapons to Muslim and Filipino rebel groups he knew to be violent criminals, as long as he could become secretary of state.

Hypocrisy of this magnitude, per- formed with such Tarantinoesque flare, should be as big a story as any social conservative caught in a sex scandal. Yee’s coverage is falling far short of that standard.

When the details of a corruption accusation aren’t quite as sexy, as in the case of former-Charlotte Mayor Patrick Cannon, who was allegedly trading favors and promises of federal money with developers along the city’s new train lines, there’s one thing that always catches the media’s attention: a connection straight to the White House.

“Cannon allegedly boasted to the undercover agents about an upcoming trip to Washington during a meeting in the mayor’s office. He said he would use his clout to push for Charlotte streetcar funding.

“So, you know, Friday I’m meeting with the President,” he said. ‘The President will be asking what my priorities are. I’m gonna say the Gold Lynx Line’s a priority and I want to see that through.’”

The White House declined to comment on Cannon, and this tidbit has been left out of all but local news stories.

Well, if that smoke doesn’t get the press looking for fire, what about an intra-party dispute, waged in a very public fashion?

In Pennsylvania, Democratic Attorney General Kathleen Kane declined to file charges against four Philadelphia Democrats caught on tape taking cash for favors. Kane claimed the sting, years in the making and conducted by well- known investigators, some of whom were black themselves, was influenced by racism and the informant had gotten “the deal of the century,” making his credibility tainted.

Critics accused her of shielding her own party from political harm. Republicans set up in the same sting had declined to play ball. The investigators she accused of racism made their umbrage public.

Philadelphia’s District Attorney Seth Williams, a black Democrat, spoke up for the investigators: “I am offended. I have seen racism. I know what it looks like. This isn’t it.”

“My colleagues and I conducted our investigation honestly, ably, and with integrity,” wrote high-profile prosecutor Frank G. Fina in a Philadelphia Inquirer op-ed. “I am willing to sit down at the same table with AG Kane, across from Inquirer reporters and other members of the media, where we can each respond to any questions that are posed about the investigation. I have no objection to the televising of this conversation.”

Kane was later found to have signed off on the very deal she blamed for tainting the investigation.

I feel like that’d make great TV. If only there were a Republican involved.

Mary Katharine Ham is editor-at-large of HotAir.com and is a contributing editor for Townhall Magazine.