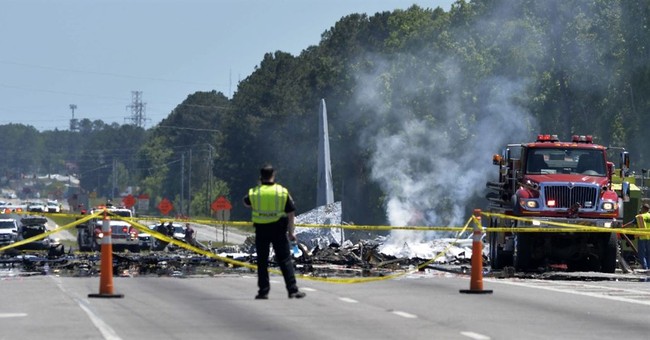 "A crew of nine Puerto Ricans were flying an Air National Guard C-130 into retirement in Arizona when it crashed onto a highway in Georgia on Wednesday, and authorities said there appeared to be no survivors.

The plane crashed onto state highway 21 moments after taking off from the Savannah/Hilton Head International Airport, narrowly missing people on the ground and sending an orange and black fireball into the sky.

“It miraculously did not hit any cars, any homes,” Effingham County Sheriff’s spokeswoman Gena Bilbo said. “This is a very busy roadway.”

“The planes that we have in Puerto Rico — it’s not news today that they are the oldest planes on inventory,” Rivera said. Puerto Rico’s National Guard has five other similar planes, two of which are not in use because they require maintenance, he said."

The names will not be released until the next of kin notification process has been completed within 24 hours.

Another fatal military accident has shocked the nation as nine people on board National C-130 crashed nearby Savannah, Georgia. However, the military has not released numbers on how many individuals have died.

"There were airmen on the plane who were deceased, but we're not giving out any numbers at this time," Master Sgt. Roger Parsons of the guard said.

The plane accident was recorded via a security camera miles away. The plane is seen going down before a fireball of black smoke erupts from the scene.

Prayers go out to the families of all on board the plane that crashed in Garden City today. Captured from my business’ surveillance cameras #CNNiReport pic.twitter.com/08Ms4gADMv

Local members currently on scene assisting with clean up. pic.twitter.com/lSuRcqTx56

"Truck driver Roger Best works for a transportation company in Garden City, about 4 miles south of the crash, and saw the plane overhead before it plummeted to the ground. It was so low when it passed over that it rumbled the ground beneath his rig, he said.

His company handles hazardous materials, he said, expressing gratitude that the aircraft didn't crash in his immediate vicinity.

"If he did this area is a giant bomb and this whole (five-mile) radius would have blown up," he told CNN over Facebook, calling the pilot a hero for avoiding the area. "He barely made it over the tree line (and it) looked as if he tried to turn and nose dive straight into the ground right in front of me."

There have now been several fatal military accidents on American soil this year, with 16 members of the military being killed. It is unclear what caused this crash.