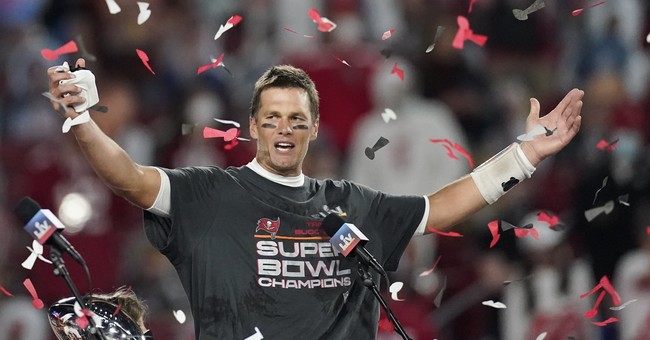 Look, I know some don’t care for the NFL with all the political stuff. That’s your choice. It’s my favorite sport. I'm always going to watch football on Saturday and Sunday; I watch college as well. Set your clocks because football is back in 230 days. Oh, but that doesn’t mean I’ll call out the NFL or some writers for their idiocy when they do get political. Let’s take the Washington Post right now. Days prior to Super Bowl 55, they actually published something about Tampa Bay’s affinity for the buccaneers and how that might be problematic (via WaPo):

On Sunday, the Tampa Bay Buccaneers will take on the defending Super Bowl champion Kansas City Chiefs in Super Bowl LV at Raymond James Stadium in Tampa — the first time a team has played a Super Bowl at their home stadium. And the Buccaneers’ name and logo are a true reflection of the city hosting the game, trumpeting its close association with pirate legends, like José Gaspar, namesake of an annual Tampa Festival.

When the National Football League expanded to 28 teams in 1973, the league awarded Tampa an expansion team, prompting a name-the-team contest in 1975. “Buccaneers” won, a reference to the pirates who frequented the coasts of Florida in the 17th and 18th centuries. But team executives wanted the logo to be a “classy” pirate — a cross between Robin Hood, Errol Flynn, the musketeer D’Artagnan and pirate Jean Lafitte. It was a logo the team maintained until 1997 when they switched to a more aggressive, menacing Jolly Roger.

Yet, while this celebration of piracy seems like innocent fun and pride in a local culture, there is danger in romanticizing ruthless cutthroats who created a crisis in world trade when they captured and plundered thousands of ships on Atlantic trade routes between the Americas, Africa and Great Britain. Why? Because it takes these murderous thieves who did terrible things — like locking women and children in a burning church — and makes them a symbol of freedom and adventure, erasing their wicked deeds from historical memory. These were men (and women) who willingly participated in murder, torture and the brutal enslavement of Africans and Indigenous peoples.

Perhaps time has dulled us to the atrocities committed by these 17th and 18th century outlaws. Or perhaps it’s the fact that if pirates of the Golden Age were bloodthirsty, so too were the nations who opposed them. They willingly and purposefully massacred millions of African and Indigenous peoples in the name of colonization. Pirates, then, are seen as romantic heroes — the underdogs fighting the establishment — whom historian Marcus Rediker refers to as proto-democratic, egalitarian and multicultural.

Should we celebrate their complicated legacy? It’s a question Tampa Bay has to contend with as we collectively contemplate other major sports mascots with dubious legacies, like their Super Bowl rivals in Kansas City.

Who thinks like this when it comes to sports? Oh, that would be progressives. I know some might find this annoying, but I actually think this is entertaining as hell. These people think we care. I couldn’t care less, but now that you spoke about the savagery of pirates—it makes me like the Bucs even more. I already sort of liked them being that former Giants linebacker Jason Pierre-Paul is on the team thanks to a 2018 trade that looking back was probably done in error. But the Left is saying don’t like the Bucs due to ‘woke’ reasons and extraneous historical analysis that’s meant to set the stage for cultural cancellation, so I’m going to support them. Why? Whatever the Left hates, I like—that’s the new rule. Screw them. Only people who care about this nonsense are those who don’t watch football, understand fan bases, or dwell on an op-ed like this and think that the wholly insignificant analysis about the team name is something worthy of a debate; these are the loser of losers. Pirates are bad people, so maybe we shouldn’t embrace them.

It’s even more insignificant now that the Tampa Bay Buccaneers throttled the Kansas City Chiefs in Super Bowl 55. Tom Brady has his seventh ring, JPP has his second, the other coming from when the Giants beat Brady in Super Bowl 46, and the city is going haywire as it should. No one partying last night cared about the barbarous acts of pirates. Who cares? Only a progressive who thinks America is evil, its past times are grounded in racism, and that everything needs fixing cares—and these people are just insufferable. Why aren’t their ideas taking seriously? It’s because of stupid op-eds like this. I think even a healthy number of liberals couldn’t give a flying you-know-what about Tampa Bay’s home football team. You’re world champions.

There may be some Brady hate here as well. For the woke individual, Tom Brady is friends with Trump. They’re also played a team with an American Indian name. Yeah, for a die-hard progressive, this Super Bowl Sunday was one massive problematic maze. We relish that you were uncomfortable. No one cares about your lectures, so enjoy the game or shut up.

As for me, there is nothing to hate regarding Tom Brady. The New York Giants beat them twice. Eli Manning remains the only quarterback to slay Brady twice in the biggest game of the year. And while Tom should enjoy his seventh ring—it also bolstered the legacy of Eli Manning as well. He was already going into the Hall of Fame. It was never a debate, though some thought it was, bless their hearts. You cannot tell the story of Tom Brady without his two losses to Manning and the Giants. And in both cases, Manning made two stunning game-winning drives, each with clutch passes that will be forever enshrined on the list of greatest NFL plays of all time.

And Tampa Bay, enjoy yourselves. Celebrate your affinity for pirates all day every day.