Cherokee Nation To SacajaWarren: Listen, White White Lady, You're Still Not One Of Us 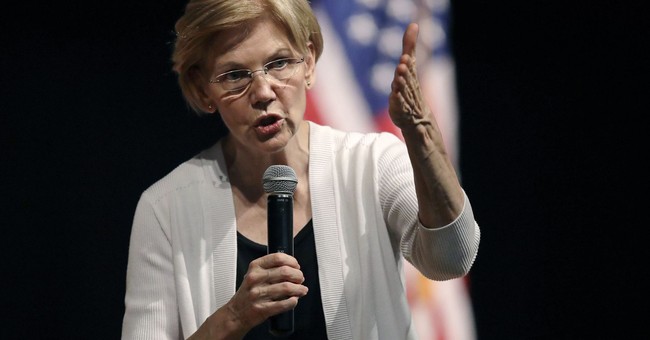 Yesterday was gold in the field of so-called cultural appropriation. Sen. Elizabeth Warren (D-MA), who keeps peddling the lie that she’s a full-blown Native American.

Warren pushed this lie during her academic career, which was dredged up in 2012. Then-Sen. Scott Brown (R-MA) was running for a full term in the U.S. Senate having won the special election to fill the vacancy left by the late Ted Kennedy. Warren won because it’s deep blue Massachusetts, but this issue has not gone away. President Trump has slammed Warren for continuing to sell this racial hoax, calling her “Pocahontas.” The evidence Warren gives to legitimize this claim is shoddy at best. She has high cheekbones or something.

Thus far, Warren has submitted no solid genetic evidence to suggest she’s actually Native American, though everyone knows that she isn’t. The Boston Globe has noted how this claim is problematic. Local papers have said she should take a DNA test, and even The Daily Show has highlighted Warren’s lies about her racial background.

#BREAKING: Senator Elizabeth Warren has released the results of a DNA test after years of being dogged by questions about her claims of Native American ancestry. https://t.co/y3Vxv3Jaqd

Just found out that the The Hill is preparing a reaction story on Tweets about Elizabeth Warren as a way to fight back for her. They’re going to look at everyone’s Tweets as opposed to Warren’s false claims. Why don’t people trust media again?

This is the greatest correction in the history of corrections. pic.twitter.com/IUjUWrJ0L6

Native Americans have torched her for continuing to say she’s part Cherokee. Now, she’s released data from a DNA test she took to finally prove the naysayers wrong. In reality, she proved us all right. The initial results were that she was 1/512th Native American, according to The Globe. This was later revised; she’s actually 1/1024th Native American, which is a scientific way of saying she’s not part Cherokee by any stretch of the imagination. Oh, and the two professors in this little video about how she didn’t use her fake Native American heritage for personal gain are campaign donors, by the way (via Free Beacon):

Two of the professors featured in Sen. Elizabeth Warren's (D., Mass.) new campaign video about her Native American ancestry have also donated to the Massachusetts senator.

University of Texas-Austin Law School professor Jay Westbrook and Harvard Law School Professor Charles Fried both gave testimonials to Warren in the video and have donated $6,111 and $250 to her, respectively. Fried served as solicitor general under Republican President Ronald Reagan.

Warren released a video on Monday delving into her longtime claims of Native American ancestry and whether it had an effect on her hiring as a law professor at various schools in the 1980s and 1990s.

Finally, the Cherokee Nation itself delivered the final blow to Warren, pretty much telling Warren that the DNA test she took is crap, saying to use it in the manner she did is a disgrace to tribal governments. They also noted how inaccurate they are, specifically when it comes to determining whether the person in question’s ancestors are indigenous to North or South America. For Warren, it could be the latter, but that’s not what she’s been selling in years past (via The Oklahoman):

"Using a DNA test to lay claim to any connection to the Cherokee Nation or any tribal nation, even vaguely, is inappropriate and wrong," said Chuck Hoskin Jr., the tribe's secretary of state.

"It makes a mockery out of DNA tests and its legitimate uses while also dishonoring legitimate tribal governments and their citizens, whose ancestors are well documented and whose heritage is proven."

Warren, a Massachusetts Democrat and possible 2020 presidential candidate, has been dogged in recent years by accusations that she may have exaggerated her claims of Native American heritage. Warren, who was raised in Oklahoma City, has said her connections to the Cherokee and Delaware tribes are part of family lore.

"A DNA test is useless to determine tribal citizenship," Hoskin said in the statement Monday, which was released by the tribe. "Current DNA tests do not even distinguish whether a person's ancestors were indigenous to North or South America.

"Sovereign tribal nations set their own legal requirements for citizenship, and while DNA tests can be used to determine lineage, such as paternity to an individual, it is not evidence for tribal affiliation."

The Daily Caller’s Benny Johnson had a good thread detailing the long history of the Warren-Indian fairy tale:

Every Time Elizabeth Warren Has Lied About Her Native American Heritage:

1. Elizabeth Warren self-identified as a "Native American" in the The Association of American Law Schools Directory of law professors in every edition printed between 1986 -1995.

2. After becoming a professor at the University of Pennsylvania, Warren demanded the University change her faculty listed ethnicity from “white” to “Native American.”

3. Warren was identified by Harvard Law as a “woman of color.” Harvard promoted Warren’s hire as expanding their campus diversity by hiring a woman with "minority background" onto their faculty.

4. Warren claimed that her mother and father had to elope due to her mom’s obvious Indian heritage and the white bigotry of her father’s family. Here is a photo of Warren's mom: pic.twitter.com/B2zSHdNkXL

Here is video of Warren telling this story: "My mom and dad were very much in love and they wanted to get married. My father's parents said 'Absolutely not because she's part Cherokee and Delaware.' After fighting it they eloped." pic.twitter.com/3lGCf9xGmY

6. Warren used offensive, racially charged language to defend her claims of Native American heritage, declaring that her family had “high cheekbones” like “all the Indians do.”

Here is video of that moment: pic.twitter.com/DzU60yowHe

7. Warren has now claimed that she *may* have 1/1024th Indian DNA. This is equally problematic since DNA science proves that the average white American has .18% Indian DNA, far more that Warren's .098% (lowest estimate according to study) https://t.co/tNwZcdIDeS

9. Warren's DNA report did not measure actual Native American DNA. The report actually measured Colombian, Mexican and Peruvian DNA. Of which Warren *may* have a tiny, tiny fraction - possibly. pic.twitter.com/SK7LExbawl

10. It is very difficult to argue that Warren did not commit racial fraud. She used the advantages in the system to advance her career with no evidence (to this day) that she is actually Native American. Democrats defending her behavior on this point is dubious - at best.

And now we’re going to see liberals defend this—and it’s going to be hilarious. White people, who liberals hate, are now the final judges on who belongs to which racial group. Alas, identity politics has crashed into the wall, and that disfigured, charred, corpse that’s stuck in the driver’s seat is Liz Warren’s presidential ambitions.

Beth Baumann
Is This Why Jim Acosta Went to CPAC?
Matt Vespa
How Vile: Dems Vote Down an Amendment to Aid Students with Mental Health Needs
Beth Baumann