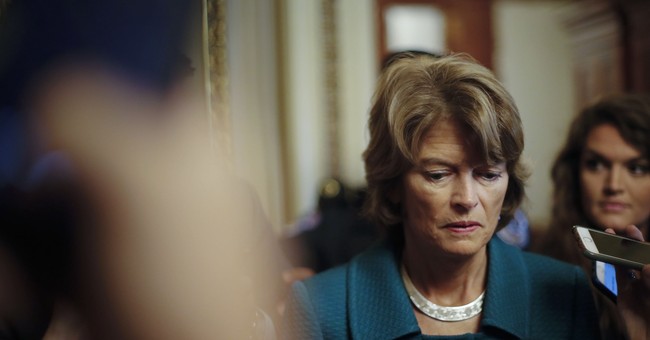 If you were to tell me that Sens. Jeff Flake (R-AZ), Lindsey Graham (R-SC), Mitch McConnell (R-KY), and Susan Collins (R-ME) would be the key players to get Judge Brett Kavanaugh confirmed to the Supreme Court, I’d say you were on crack cocaine. Alas, things change, and surprises can pop out of nowhere. Heck, who knew U.S. Ambassador to the U.N. Nikki Haley would resign, something that was in the works and kept secret for the past six months.

The Kavanaugh fight was one of the most brutal on the Hill. The Democrats executed a last-minute blitz on the judge, bringing forward shoddy sexual misconduct allegations against him at zero hour of the confirmation process. There were actually five. One was recanted, while the other detailed an allegation of sexual misconduct in an anonymous letter sent to Cory Gardner’s (R-CO) office that had no name or return address. The three the media obsessed about have no evidence or witnesses.

In fact, that’s with all of the allegations that were hurled at Kavanaugh over the past two weeks. Christine Blasey Ford, the first accuser, couldn’t remember key details and had no evidence or witnesses. Deborah Ramirez, who alleged that Kavanaugh exposed himself at a party at Yale, isn’t sure he was even there. Julie Swetnick, the third and most absurd accuser, says Kavanaugh was part of a gang rape ring in high school, though the judge never assaulted her. Anti-Trump lawyer Michael Avenatti represented her. Anti-Trump lawyer Debra Katz represented Ford. These are Democratic operatives. It was a political hit job—and anyone with two eyes could see that.

Of course she did. she kept hoping she'd be spared from ever having to vote at all. https://t.co/zOPgWwyuA7

1) Just to be clear on what @lisamurkowski voted for today:
--to legitimize and sign off on the most despicable tactics ever in a nomination.
--to stand with Dianne Feinstein, Cory Booker, Kamala Harris.
--to leave Judge Brett Kavanaugh subject to claims of perjury/impeachment

2)
--to abandon due process and presumption of innocence.
--to potentially leave High Court at a 4-4 deadlock, putting the loony 9th circuit in control of everything that matters to Alaska--development, prop rights, gun rights, enviro rules, etc.
Quite the statement.

I'm struggling (and totally failing) to imagine @lisamurkowski contemplating any of the legal and Constitutional questions that Susan Collins is so capably covering right now.

So, what does this have to do with Sen. Lisa Murkowski (R-AK), the lone Republican to vote against this nomination? She should’ve voted yes. Sen. Collins’ hour-long speech detailing why she would be a “yea” vote was a thorough, detailed, and concise case on why you should vote for this man. Murkowski decided to side with Democrats and in doing so, gave her support for character assassination tactics and the abandonment of due process. He’s a good man, but not right for the job right now. What kind of weak, spineless crap is that, Lisa? Flake grew a spine. Collins grew a spine. Collins eviscerated the Democratic narrative in an hour. The New York Times refused to run stories on Ramirez and Swetnick because—shocker—they couldn’t confirm any aspect of their stories. You couldn’t jump on board? It’s pathetic. Back home, the Alaska GOP is weighing in on ways to punish her, including withdrawing party support:

Party Chairman Tuckerman Babcock says the committee could decide to issue a statement. Or he says it could withdraw support of Murkowski, encourage party officials to look for a replacement and ask that she not seek re-election as a Republican.

He says the party took that more extreme step previously with state legislators who caucused with Democrats.

Murkowski is up for re-election in 2022.