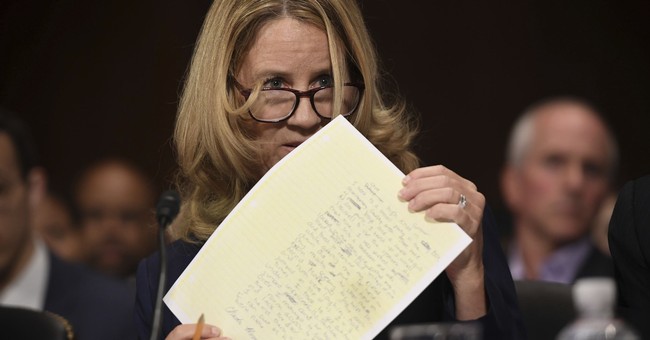 It’s been a frenetic couple of weeks. It’s been nasty. It’s been a knife fight. The Left tried to stop Judge Brett Kavanaugh from becoming the next Associate Justice of the U.S. Supreme Court. They almost succeeded, spewing baseless sexual misconduct accusations that turned the nomination process into a freak show. Their base is animated, but so is ours. At no other point in the Trump presidency has the Right been so united behind defending and confirming this man. Very soon, it will be made official. Sens. Jeff Flake (R-AZ), Joe Manchin (D-WV), and Susan Collins (R-ME) have all announced they’re voting for Kavanaugh. That’s more than enough to confirm him. It’s over.

The sexual misconduct allegations against Kavanaugh all were lacking evidence and corroborating witnesses. It was a horrid window into how the Left views due process and the presumption of innocence. In short, it’s lacking in their world. It’s all guided by identity politics and the cuckoo notion that women are incapable of lying. The first allegation lobbed by Christine Blasey Ford, where she says a drunken 17-year-old Kavanaugh tried to rape her at a high school party, was handwritten in a letter to Sen. Dianne Feinstein’s (D-CA) office, where it sat for weeks. Feinstein didn’t disclose it to anyone, not even her Senate colleagues until the last minute, which set off this clown show. In all probability, the Democrats leaked the letter and weaponized this woman’s allegation. There’s not a shred of evidence to confirm this—and Ford can’t remember key details. She doesn’t know who organized the party, whose house it was in, how she got there, or who drove her home after the alleged attack.  Years later, when doing a home renovation, an argument over a door brought out the story in couple’s therapy in 2012. Yet, Paul Sperry of Real Clear Investigations noted something odd about this part of Ford’s testimony before Congress, namely that the timeline doesn't match up:

Ford testified last week that she had never revealed the details of the alleged attack until 2012, when she was in couples therapy with her husband. She said the memories percolated up as they revisited a disagreement they’d had over her insistence on installing a “second front door" when they had remodeled their Palo Alto, Calif., home.

The need to explain a decision her husband “didn’t understand,” Ford testified, pushed her to say she wanted the door to alleviate symptoms of “claustrophobia” and “panic attacks" she still suffered from an attempted rape allegedly perpetrated by Kavanaugh in high school during the early 1980s.

"Is that the reason for the second door — front door -- is claustrophobia?” asked Sen. Dianne Feinstein, the top Democrat on the Judiciary Committee. “Correct,” Ford replied.

“The door was not an escape route but an entrance route,” said an attorney familiar with the ongoing congressional investigation. “It appears the real plan for the second front door was to rent out a separate room."

The discrepancy raises fresh doubts about Ford's candor and credibility amid other inconsistencies, congressional and other knowledgeable sources say, including her purported "fear of flying."

Palo Alto city records show that a building permit for an additional room and exterior door was issued to Ford and her husband on Feb. 4, 2008 — more than four years before the May 2012 therapy session where, she says, she first identified Kavanaugh as her attacker.

All the remodeling, including a new bathroom, was completed by February 2010. The only additional permits issued to Ford at her Palo Alto address are for "solar panels" on the roof, a "solar hot water system” in the garage, and an “electric vehicle charge station” for the driveway -- all of which were issued after 2012.

The attorney said the tenants call into question Ford’s claims about why she installed the additional exterior door in her home.

“Renters and a business operating out of Dr. Ford’s home would explain the added door,” he said. "Clearly, there were business purposes [for it], not just ones related to her anxieties."

Property records show Ford and her husband,  Russell Ford, bought the beach house in 2007. This July – the same month Ford sent a letter to Feinstein accusing Kavanaugh of attacking her -- Ford applied for permits to build a front porch and new decks at the home, located on Seaside Street in Santa Cruz. There is no application for a second front door, however, and the recent permits are the only ones applied for since 2007.

No evidence has emerged of any other exterior door construction at either of Ford's homes, authorized or not.

"If she rents out the room to Google employees, how does she get access to the second door to escape a perceived attacker?” noted the attorney, who spoke on the condition of anonymity. “Renting out the room is completely contrary to her stated reason of why she wanted the second front door."

Sperry noted that this door spat was not included in Feinstein’s letter, or during the polygraph questioning, or her letter to Senate Judiciary Committee chairman Chuck Grassley (R-IA). He also suggests that Ford knew Kavanaugh was in contention for a Supreme Court nomination since 2012, where a piece in The New Yorker by Jeffrey Toobin gave a dire warning about this man being selected by Mitt Romney if he won the presidential election.

“I recall saying that the boy who assaulted me could someday be on the U.S. Supreme Court, and spoke a bit about his background at an elitist all-boys school in Bethesda, Md.,” she said in her testimony.

Ford is a liberal, but she claims this was not a politically motivated decision. Sperry added that the GOP never bought this:

So, after telling no one her story about Kavanaugh for decades, she suddenly remembered and spoke about it in couples therapy, triggered by a spat over a door, in 2012 -- which also happens to be when her fellow Democrats were worrying about the possibility that Mitt Romney could win the presidency and appoint Judge Kavanaugh to the Supreme Court? Call me skeptical," a senior GOP congressional staffer said. “There's obviously more to the story than just a door."

There are other discrepancies, which Guy touched upon as well. The story has more holes than a slice of Swiss cheese; there is no evidence, and no corroborating witnesses. Her lawyers are acting more like Democratic operatives, one of which, Debra Katz, is unabashedly anti-Trump. And this whole circus came to town at the 11th hour—when it seemed certain that Kavanaugh was going to be confirmed without a hitch.

Sorry, this looks like a political hit job—and it probably was an attempted one. It was a Hail Mary pass. Still, the notion that Democrats tried to destroy a man’s life without due process, use a woman’s attempted rape, or better yet hope that she was attacked, in order to boost their chances for political gains on the Hill this upcoming midterm cycle, and dragoon the FBI to deliver the kill shot, should disturb us all. At the same time, this is politics. It’s war. They were playing to win. They almost stopped us, but the GOP grew a spine and held the line. Everyone, that is except Sen. Lisa Murkowski (R-AK).