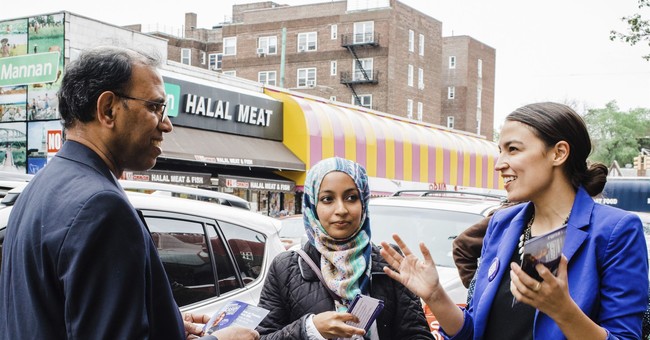 Yet, the biggest upset came from the Empire State. The Democratic Party is in a state of civil war. A 28-year-old political neophyte, Alexandria Ocasio-Cortez,who is a democratic socialist and supports abolishing Immigration and Customs Enforcement, trounced Rep. Joe Crowley (D-NY) of the state’s 14th congressional district.  It wasn’t even close; Ocasio-Cortez beat Crowley 57/42. This was the Democrats’ Eric Cantor moment. In 2014, then-House Majority Leader Eric Cantor was challenged by David Brat in Virginia. Brat ended up beating Cantor in an upset race, which led to the latter’s early resignation from Congress; Brat went on to win the general election in the 2014 midterms.

This is the start of a movement.

Crowley was seen as a possible contender to challenge Nancy Pelosi in leading House Democrats, possibly even making a play for the speakership. That’s over with now. As pollsters and data crunchers noted last night, there will be a discussion about the next wave of Democratic Party leaders emerging after tonight. Also, how Crowley, who usually cruised to re-election, was torpedoed by a challenger’s lurch to the left and changing demographics.

Folks, this could be THE upset in the making this primary season. Joe Crowley is down 16 points with 43% of the vote in. This is no drill. This could really be happening.

For those wondering, an equal percentage of vote is being reported from Queens and the Bronx. Crowley is getting crushed in his home boro of Queens right now.

Again, it's probably not any one thing that allowed Ocasio-Cortez to win. It was some combo of running to the left, being a woman, being a minority (in a majority-minority district), running a very good campaign, and Crowley dismissing her at points.

Also, as with many insurgent candidate wins, both Democratic and Republican, it comes down to the messaging, not the money. Crowley outspent Cortez big league, but in the end, that didn’t matter all that much (via NYT):

The last time Mr. Crowley, 56, even had a primary challenger, in 2004, Ms. Ocasio-Cortez was not old enough to vote.

Mr. Crowley, the No. 4 Democrat in the House, had drastically outspent his lesser-known rival to no avail, as Ms. Ocasio-Cortez’s campaign was lifted by an aggressive social media presence and fueled by attention from national progressives hoping to flex their muscle in a race against a potential future speaker.

Ms. Ocasio-Cortez had used Mr. Crowley’s role in the leadership, and the fact that he was the head of the local Democratic Party machine, against him in her bid to upend the existing political class. She will face Anthony Pappas, the Republican candidate, in the November general election.

Mr. Crowley is the first House Democrat in the nation to lose a primary in 2018. His loss is most significant for a congressional incumbent since Eric Cantor, then the No. 2 Republican in the House, was defeated in 2014 to a Tea Party activist, David Brat.

Like that contest, the Crowley defeat is expected to shake up Congress, where Mr. Crowley was seen as a top contender to replace Ms. Pelosi, if she stepped aside after the midterms.

The far left had another good night. And keep an eye on this march to abolish ICE from these candidates. This is the crack cocaine of the progressive base—highly addictive. As long as the Trump White House keeps pushing its non-controversial policy of actually enforcing federal immigration laws, this will be a rallying cry. The Democratic establishment has found that the base likes this idea, though it might make them looks nuts to general electorate voters, while giving the GOP some nice political ammunition: liberals hating police. Now, that’s a slam-dunk. Yet, the impact of Cortez’s win is yet to be deciphered. Maybe it’s the same old narrative that the progressive win of the Democratic Party is ascendant, they’re not afraid to take insane policy positions, and that they’re cleaning house.

Now @JoeCrowleyNY is playing guitar. He dedicated the first song to @Ocasio2018 — “Born to Run”
@ pic.twitter.com/U3sx6mth90

Correct. It was part of a larger GOP movement towards immigration positions being a key indicator in primaries. IDK what Ocasio-Cortez's win means yet exactly. https://t.co/iQ9enJ9cGl

These were my words in NY-14 earlier today... Needless to say, I'm surprised/shocked. Andrew Cuomo better watch his back. https://t.co/3dDz6y4CJd pic.twitter.com/OiQNAzxSMo