Alec Baldwin Is '1,000 Percent' Sure He Can Beat Trump 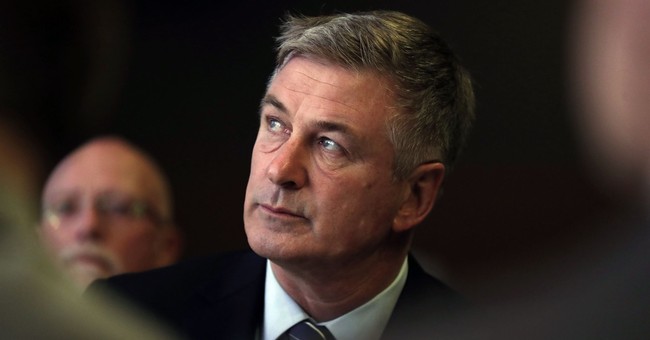 What is Alec Baldwin thinking? No, I’m not talking about his awful SNL impersonation of President Trump. I’m talking about his 2020 ambitions, if he has any that are serious. Howard Stern recently interviewed the actor, where he confidently said that he would win if he ran in the next presidential election. He bets that he has a 1,000 percent chance of winning (via NTK Network):

“I can only think of a couple people who I think could beat Trump,” he told Stern.

The radio host then suggested that the actor and Trump impersonator run himself.

He joked that as president he would take the entire summer off to spend with his kids, slipping into his Trump impersonation.

Okay—well, let’s just take this as another sign that no one can beat Trump on the Left. Baldwin thinks because he’s got a high profile and celebrity status he can duplicate Trump, make him the anti-Trump. I can follow this, but what has he done besides movies and television? Trump actually built things and despite skepticism of his grasp of policy, which is not unwarranted, he’s crafted a tax reform package that has the economy soaring into the stratosphere. How could Baldwin top that? What would Baldwin do on North Korea? Everyone thought Trump would cause a nuclear war. We got a historic summit instead. Also, does Baldwin not think that the now-hyper politically correct progressive base is going to allow his gay slur slide? Yeah, remember when he called the paparazzi a “c**ksucking f*g”? Yep, that’s what cost him his show, Up Late, on MSNBC back in 2013 after a five-episode run.

There are better candidates in the Democratic Party than Baldwin. Are there any right now that people can point to and say he can compete and possibly beat Trump? No. Not by a long shot. Then again, there’s still a long time until 2020.

I don’t think this is serious, but you never know with the Left nowadays due to their Trump Derangement Syndrome.