The Other America: The Anti-Gun Left Is Learning Their Tactics Do Not Resonate In Santa Fe 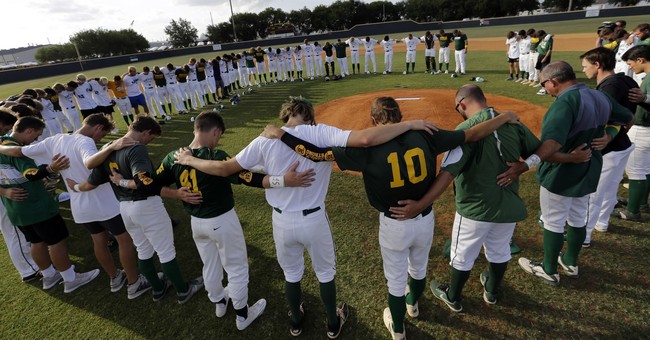 After the horrific shooting at Marjory Stoneman Douglas High School in Parkland, Florida last February, gun control was back on the table. It was another round of liberals not understanding gun terminology or laws. Not understanding that this isn’t an issue they can win, and not understanding that it will fade. Gun control does do two things for the Left. It divides the Democratic Party down the middle—and it energizes Second Amendment voters and Republicans. Unlike the anti-gun liberals, pro-gun rights conservatives don’t forget. The CNN town hall after the shooting was an absolute disgrace. It was a show trial, smearing the National Rifle Association, Republicans, Second Amendment supporters, and every law-abiding gun owner in the country. It was also held in one of the most liberal parts of the country. That whole greater Miami area is a liberals’ paradise—literally.

Students David Hogg, Cameron Kasky, and Emma Gonzalez formed March for Our Lives, appropriated a Holocaust remembrance slogan as their own, and wanted to change the gun culture of America. They had initial success. Vermont and Florida, both with NRA-friendly GOP governors signed anti-gun legislation into law. Other deep blue pockets of the country, like Deerfield, Illinois, Boulder, Colorado, and Oregon, have also upped the ante on anti-gun legislation, trying to outright ban AR-15s. No grandfather clause—nothing; they want to ban AR-15s within their state or city limits and as Deerfield is doing, fine people $250-1,000 per day for non-compliance unless law-abiding citizens destroy, surrender, or transfer their firearms.

In Oregon, they at least give you the option to register them with the state. It’s outrageous, but that’s how the anti-gun Left won the first round. Now, reality is setting in for this cadre of anti-gunners. Their message is not universal. It’s very much confined to the deep-blue, urban-based confines of America, where the insufferable condescending legions of liberals bash Trump, his supporters, and anyone who isn’t like them. That’s a majority of the country. Who would have thought that a message catered to and digested solely by the limousine elite, who couldn’t care less about working families would fall flat in rural America? Gee—I’m shocked (sarc.) I have to sit down. Once again the liberal news media has discovered that in large swaths of America, their brand of politics isn't one that resonates. Santa Fe is a prime example.

Last Friday, Dimitrios Pagourtzis using a shotgun and a revolver, shot and killed 10 people at Santa Fe High School in Texas. Pagourtzis illegally possessed these firearms, which were owned by his father, as he is only 17-years-old.

Yet, in the aftermath, there are no calls for gun control here. It’s an area that broke heavily for Trump. Gun ownership is not an alien concept, and it’s a place where the act of offering thoughts and prayers is not mocked. Anti-gun liberals hate this reaction, though it’s in keeping with their philosophy. Remember, the Democrats are the party that booed God in 2012.

I am trying to imagine myself, after the major tornadoes that I lived through, working alongside somebody who flew to my town to "help." Only to find out later that they said my "thoughts and prayers" don't matter, and that they were actually there to meet with people...

NBC News, Buzzfeed, and the LA Times all reported on the striking differences to these tragedies; a foray into the other America that the Left seems content on ignoring with their smug self-righteousness. That’s fine. Only makes towel slapping them in the face after another election all the more satisfying.

Buzzfeed added that those working for anti-gun organizations noted the stark differences between the two communities [emphasis mine]:

The MFOL members quickly realized their limitations in a rural community where most students told BuzzFeed News they haven’t heard of, followed, or supported the movement — a stark difference from the widespread energy for change the Parkland teens created after the shooting at their school, thanks to their ferocity on Twitter and relentless engagement with the media.

So instead, the Parkland teens sought to connect with a few like-minded Santa Fe survivors to share their experiences of coping with the trauma of a school shooting — and offer practical tips of dealing with the media and political fallout.

And the handful of Santa Fe students who are working with MFOL are doing so relatively quietly, out of respect for a town that values faith, community strength, and responsible firearm ownership — not demanding political action.

“Out of Parkland there was a lot of rage immediately. I don’t feel that kind of rage here,” said Post. “It’s such a nice community that no one wants to be an adversary.”

LA Times reported that students weren’t blaming guns for what happened, with vigils not even mentioning guns. There are also no protests being planned in support of gun control:

There was no outcry against firearms in Santa Fe after a gunman killed 10 and wounded 13 others Friday. Guns didn't come up at a prayerful vigil attended by 1,000 people that evening. On Saturday, there were no protests, and local leaders don't expect any Sunday.

The Rev. Brad Drake has ministered to the Santa Fe community for seven years at Dayspring Church, an Assemblies of God congregation of about 150 people a few miles from the high school. The town of about 13,000 has 15 churches, and Drake serves on the local ministerial alliance as well as the Chamber of Commerce.

After the shooting, he worried that outside groups might show up with political agendas. He noticed a man openly carrying a handgun on his hip at the Friday vigil. But that was it, he said.

Like many in Santa Fe, the pastor didn't fault guns. He faulted himself, and society. Schools need help to improve security, but that won't prevent shootings, he said. Neither will prayer alone, he added.

"We have created a culture that does not value life, that does not honor God, that does not respect authority. We are reaping the consequences of those actions, and that's not going to be reversed by a security guard or a metal detector," he said.

No local officials mentioned guns at an afternoon briefing outside the high school.

"I can't speak for our entire country, but we need to pay more attention to mental health," Henry said, saying tougher gun laws won't keep firearms out of the hands of criminals because "they won't abide any."

A few yards away, Clarissa Potts and her 7-year-old daughter, Kaylee, added flowers to a growing memorial under a tree outside the school. She, too, opposes expanding gun control laws. She said parents need to get more involved with their children.

Up the street, a Santa Fe High junior who stopped at the Shell gas station that sells "Hunter for life" caps said she agreed.

"It's not the guns; it's the people," said Dawn Pence, 17, who wore cowboy boots and a Def Leppard T-shirt. She wasn't at the school Friday, and didn't know the alleged shooter or any of the victims.

Those who are speaking about gun control are flying below the radar. Now, we’ll see how left-wingers react to this. It’s quite possible they’re all rolling their eyes, frustrated that these dumb country bumpkins don’t understand that submitting to ever-increasing government power is the path to safety, fewer gun deaths, and nirvana. Or maybe, just maybe—it’s what a large proportion of the country thinks. That no new gun laws would stop mass shootings, and they’re right, especially on what Democrats want to push through Congress (via NBC News):

Alex Carvey hugged her friends, shed tears over white crosses bearing her classmates’ names and stood in silence for a moment. Then she reflected on the cause of the violence that hit her hometown.

“I don’t think guns are the problem — I think people are the problem,” Carvey, 16, a student at Santa Fe High School, said. “Even if we did more gun laws, people who are sick enough to do something like this are still going to figure out a way to do it. So it doesn’t matter.”

Many of Carvey’s classmates — along with their parents — agree with her. In contrast to the immediate aftermath of the Feb. 14 massacre in Parkland, Florida, when student survivors kicked off a national call for tougher gun control laws on social media and in street protests, there are few calls for new gun laws in Santa Fe.

Residents here still largely associate guns with hunting and family tradition, not mass shootings. In March, when students across the country walked out of schools to protest gun violence, just a handful of Santa Fe High School students participated.

“No matter how many laws there are, you can always break them,” said Nora Tulo, 15, a student at the high school.

As with anything the anti-gun Left pushed, give it time. The truth does come out. With Parkland, the shooter, Nikolas Cruz, was part of an Obama-era disciplinary reform program that some are saying allowed him to slide through the cracks, despite serial write-ups on his behavior. He should have been committed in 2016 for cutting himself after breaking up with his girlfriend via the Baker Act. This would have shown up on a background check, preventing him from buying the AR-15 in February of 2017, which he used in the attack this year. The FBI should have followed up on the two tips about him. The local police, who were called to his home over 40 times, in some cases, where Cruz was reported to have pointed guns at people’s heads, should have been able to do something to ensure public safety. The police, FBI, school, and local officials all failed here. It was a total failure. It wasn’t the NRA. It wasn’t the current gun laws. The current gun laws would have been able to prevent him from buying and owning guns if the officials had just acted upon the existing laws. And don’t even get me started on the Broward County Sheriff’s Department. Dear. Lord.

Even in their backyard, the March for our Lives crew isn’t energizing young voters. Is it a revolution or liberal astroturf? I think it’s the latter. A truly organic movement would have more legs, especially after a big rally in D.C. that’s looking like the high mark of this movement that will disappear into the night because liberal America’s tank of ideas are, for the most part, an unsustainable cesspool of bad ideas.

Yet, ripping the anti-gun Left. There will be no CNN town hall for these students. National media won’t interview them because it doesn’t push the gun control agenda. They want liberal rage. These kids and this community is grieving together and not rushing into the arms of liberal, anti-gun insanity. For the news media, gun deaths are only tragic if political dividends could potentially be reaped. If not, the reaction is more or less a collective shrug—whatever. It’s Texas—I’m sure that’s a common observation in the newsrooms of America’s elite media.