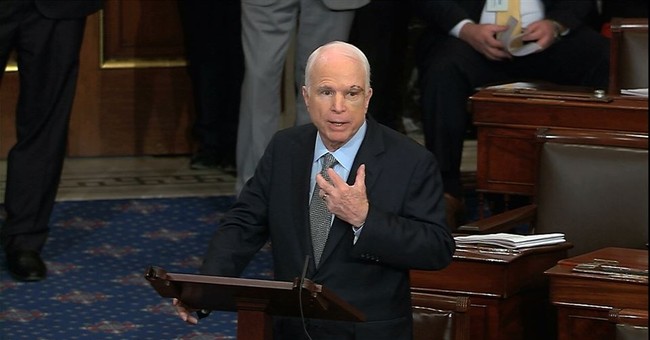 Well, it’s a lesson of watching what you say, even if it’s a closed-door meeting with White House communications staff.  Special Assistant to the President Kelly Riddell Sadler, formerly of The Washington Times, reportedly joked about Sen. John McCain (R-AZ) in a meeting this week, which did not go over well, as you can imagine, with the Arizona Republican’s family. Cindy McCain tweeted a response to Sadler, reminding her Mr. McCain is, indeed, a person, father, and husband. It was a where’s your humanity moment (via The Hill):

Special assistant Kelly Sadler made the derisive comments during a closed-door White House meeting of about two-dozen communications staffers on Thursday morning.

“It doesn’t matter, he’s dying anyway,” Sadler said, according to a source familiar with the remarks at the meeting.

The White House did not deny the account of Sadler’s remarks, which came amid a discussion of Haspel’s nomination and McCain’s opposition to it.

“We respect Senator McCain’s service to our nation and he and his family are in our prayers during this difficult time,” the White House said in a statement to The Hill.

Sadler did not respond to a request for comment and the White House did not make her available to The Hill. A source later told The Hill that Sadler called the senator's daughter Meghan McCain to apologize.

That call did not go well.

Source tells me Sadler called Meghan McCain today. And that it didn’t go so well. https://t.co/ZdAgD001jk

Mr. McCain is dying from brain cancer. It’s tragic. Yet, that doesn’t mean we can’t criticize him for trying to undercut Gina Haspel’s CIA director nomination. The hypocrisy is appalling. He’s against her nomination over the enhanced interrogation program, but voted to confirm John Brennan as CIA director who was a top official at the agency under the Bush administration and was a person who said such methods yielded key intelligence in the war on terror. Now, mocking his cancer diagnosis and joking about him dying is probably not something that should be said at a White House meeting. On the Democratic side, it’s even more ghoulish, with some members saying McCain would vote the right way on health care because he was dying of cancer. One professor was annoyed that the Arizona senator received so many well wishes; he thinks McCain is a war criminal.

The reality is that the senator’s cancer diagnosis has been politicized. It’s the nature of the world we live in nowadays. It may not be right, but here we are—and at times, that politicization can manifest itself in rather nasty forms.