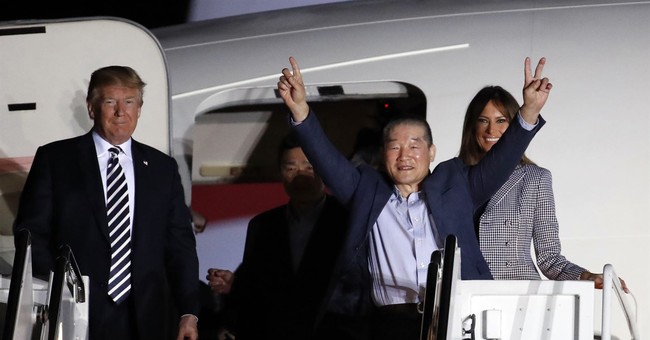 In a huge win for the Trump White House and the country, the American detainees from North Korea have been released and are back in the U.S.A. They landed at Andrews Air Force Base around 2:40 A.M. and were greeted by President Donald J. Trump and First Lady Melania Trump. The three Americans, Tony Kim, Kim Hak-song, and Kim Dong-chul, were detained by North Korea; Dong-chul in 2015 and  Hak-song and Kim in 2017 respectively. All three men appeared to be in good health, according to Reuters, but were taken to Walter Reed for further evaluation. Secretary of State Mike Pompeo had gone to North Korea and was able to secure their release in the process; the U.S. is about to hold historic peace talks with the Korean nations, most likely in Singapore in the coming months: (via Reuters):

The former prisoners, freed after U.S. Secretary of State Mike Pompeo traveled to Pyongyang for a second meeting with Kim in less than six weeks, landed at around 2.40 a.m. (0640 GMT) at Joint Base Andrews near Washington.

Trump and his wife, Melania, boarded the plane for about five minutes before the three men stepped out, shaking hands with the president and waving to waiting media and military personnel.

“Frankly we didn’t think it was going to happen and it did,” Trump said after thanking Kim for releasing the men.

“We’re starting off on a new footing. This is a wonderful thing that he released the folks early.”

Trump said he believed Kim wanted to bring North Korea “into the real world” and was hopeful of a major breakthrough at their planned meeting, which would be the first between a serving U.S. president and North Korean leader.

I think you probably broke the all-time-in-history television rating for three o’clock in the morning,” Trump joked to cameras.

Details of the planned Trump-Kim summit have yet to be announced, but a U.S. official, speaking on condition of anonymity, said Singapore had emerged as the likeliest location after Trump ruled out holding it at the heavily fortified demilitarized zone between North and South Korea.

Trump said it would be held in a few weeks’ time and details would be announced within three days.

The three former prisoners were Korean-American missionary Kim Dong-chul, detained in 2015 and sentenced in 2016 to 10 years’ hard labor; Kim Sang-duk, also known as Tony Kim, who taught for a month at the foreign-funded Pyongyang University of Science and Technology (PUST) before he was arrested in 2017; and Kim Hak-song, who also taught at PUST and was detained last year.

The trio thanked Trump and other officials for bringing them home. “We thank God, and all our families and friends who prayed for us and for our return,” they said in a statement released as their plane stopped over in Alaska.

Fantastic news -- on their way home:

The move is seen as an act of good faith from North Korea, which has promised, along with South Korea, to denuclearize the peninsula and sign a peace treaty to formally end the Korean War. They reportedly want a non-invasion pledge from the U.S. to help close this chapter of the Cold War. North Korean dictator Kim Jong-un and South Korean President Moon Jae-in held historic bilateral talks of their won on the South Korean side of the demilitarized zone. It’s the first time since the 1953 armistice that a North Korean leader has stood foot on South Korean soil. The border between the two Koreas—the 38thparallel—remains the most fortified border in the world. South Korea heavily credited the Trump White House for getting North Korea to come to the negotiation table, having slapped the nation with a series of sanctions after belligerent missile tests.

The progress on these talks have rightfully earned President Trump whispers of winning a Nobel Peace Prize, which would be a rather ironic twist for his Democratic and Republican detractors who thought he would set off a nuclear war because he was tweeting too much.