USA Today: 'Dunkirk's' Limited Number Of Roles For Women and Minorities 'May Rub Some the Wrong Way' 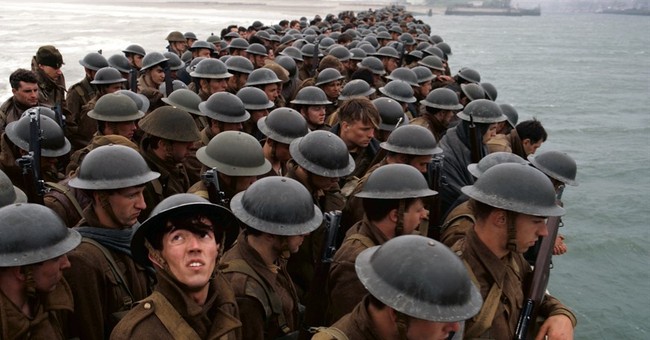 The new Christopher Nolan film, Dunkirk, is released on Friday. It details one of the greatest rescues in military history. With German armies surrounding the British Expeditionary Force around the French town of Dunkirk, total annihilation seemed imminent.  Britain seemed on the brink of disaster. Then, ships of all sizes, military and civilian, rushed in as the German military advance came to a halt, evacuating over 338,000 men on the beaches between May 26 and June 4 of 1940. It should be a great movie, but USA Today found the diminished role of women and people of color problematic [emphasis mine]:

It was highly problematic that the British Expeditionary Force and the French army stranded such a monochrome crew. https://t.co/6OgplqgzK5 pic.twitter.com/7slZa1pGGT

The trio of timelines can be jarring as you figure out how they all fit, and the fact that there are only a couple of women and no lead actors of color may rub some the wrong way. Still, Nolan’s feat is undeniable: He’s made an immersive war movie that celebrates the good of mankind while also making it clear that no victory is without sacrifice.

Are you freaking kidding me? Yeah, of course, there are few female roles; this is World War II. Yes, there’s a lack of people of color. For starters, one side was devoted to an Aryan empire. Second, the vast majority of the forces fighting in this battle were white. That’s just a fact—and who cares? It’s a war movie. Alex Griswold of the Washington Free Beacon tweeted a screenshot of an article that asked why there aren’t any women during the graphic Omaha Beach scene at the start of Saving Private Ryan. This is what we’re dealing with now from the urban-based professional elite: total crap. We all know why there were no freaking women storming the beaches of Normandy in the first wave. Do I really need to go into why this is a stupid question? We all have known that liberals have no grasp of history. They seem to have devolved into making up history to satisfy certain insufferable aspects of progressivism and political correctness.

Perhaps Dunkirk should follow in the footsteps of Call of Duty. https://t.co/3hjkMafNxc pic.twitter.com/7Ru2wAn2WN