China: You Know, Let’s Enhance Some Of Our Ballistic Missiles 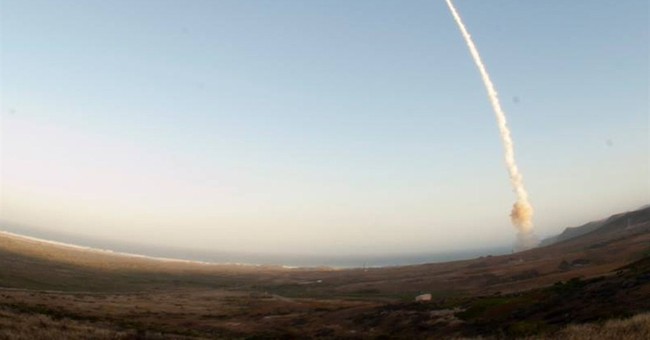 China has had this technology for decades, but decided not to enhance some of their ballistic missiles out of fear of an arms race with the United States. Now, we have a shift in policy, as the Chinese prepare to place multiple independently targetable reentry vehicles (MIRVs) onto some of their missiles. It has some in the national security and foreign policy community worried that China is prepping to challenge America’s nuclear advantage (via NYT):

Secretary of State John Kerry arrived in Beijing on Saturday to discuss a variety of security and economic issues of concern to the United States, although it remained unclear whether this development with the missiles, which officials describe as recent, was on his agenda.

American officials say that, so far, China has declined to engage in talks on the decision to begin deploying multiple nuclear warheads atop its ballistic missiles.

President Obama is under more pressure than ever to deploy missile defense systems in the Pacific, although American policy officially states that those interceptors are to counter North Korea, not China. At the same time, the president is trying to find a way to signal that he will resist Chinese efforts to intimidate its neighbors, including some of Washington’s closest allies, and to keep the United States out of the Western Pacific.

Hans M. Kristensen, director of the Nuclear Information Project at the Federation of American Scientists, a policy research group in Washington, called the new deployments of Chinese warheads “a bad day for nuclear constraint.”

This is obviously part of an effort to prepare for long-term competition with the United States,” said Ashley J. Tellis, a senior associate at the Carnegie Endowment for International Peace who was a senior national security official in the George W. Bush administration. “The Chinese are always fearful of American nuclear advantage.”

American nuclear forces today outnumber China’s by eight to one. The choice of which nuclear missiles to upgrade was notable, Mr. Tellis said, because China chose “one of few that can unambiguously reach the United States.”

Beijing’s new membership in “the MIRV club,” he said, “strains the credibility of China’s official assurance that it only wants a minimum nuclear deterrent and is not part of a nuclear arms race.”

Each one of these warheads depicted in this photo of a missile test could strike multiple American cities, military installations (missile sites), or air fields. At the same time, we have the same capability equipped in our ICBMs (intercontinental ballistic missile) and SLBMs (submarine-launched ballistic missile). For now, it appears China is poised to adopt a first strike policy.