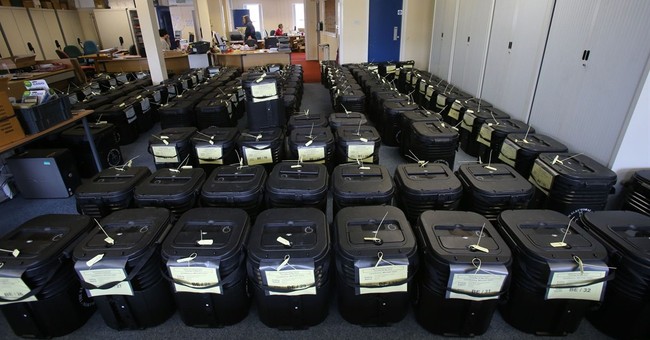 BBC panel suggests that if Tories get to 310 or more, they’ll go it alone and form a minority government.

UPDATE: Exit polls show a strong showing for UK's Conservatives with 316 seats, Labour 239 seats, the Scottish National Party set to win all but one of seats in Scotland,and disaster for the Liberal Democrats with 10 seats, down from 56.

BREAKING: Exit Poll: Scottish National Party to win all but 1 Scotland seats; LibDems fall from 56 to 10.

If Tories do get to 316, Cameron can ask Lib Dems to put him over the edge, and, if they say no, he can easily form a minority government.

Keep in mind, these projections can change. The Conservatives looks like they're set to become the largest party in the UK, but not enough to form a majority government (326 seats). Like in 2010, the projection is a hung parliament. While Nick Clegg's Liberal Democrats are slated for a disastrous showing, they would be able to keep the Conservative-Liberal Democrat coalition alive, albeit with a diminished number of MPs. Let's keep an eye on the SNP tonight. Labour has ruled out a coalition governing agreement with them.

Today, our friends across the pond head to the polls to decide if they will boost the coalition government formed by Prime Minister David Cameron of the Conservative Party, or move to the left and back Labour under Ed Milliband. Reuters called this the “most unpredictable election in decades.”

British voters get to decide on Thursday who they want to rule the world's fifth-largest economy in a tight election that could yield weak government, propel the United Kingdom towards a vote on EU membership and stoke Scottish desire for secession.

Prime Minister David Cameron's Conservatives and Ed Miliband's opposition Labour Party have been neck and neck in opinion polls for months, indicating neither will win enough seats for an outright majority in the 650-seat parliament.

"This race is going to be the closest we have ever seen," Miliband told supporters in Pendle, in northern England, on the eve of the vote. "It is going to go down to the wire."

Cameron said only his Conservatives could deliver strong, stable government: "All other options will end in chaos."

The Conservatives portray themselves as the party of jobs and economic recovery, promising to reduce income tax for 30 million people while forcing through further spending cuts to eliminate a budget deficit still running at 5 percent of gross domestic product.

Labour says it would cut the deficit each year, raise income tax for the highest 1 percent of earners and defend the interests of hard-pressed working families and the treasured but financially stretched national health service.

If neither wins an overall majority, talks will begin on Friday with smaller parties in a race to strike deals.

That could lead to a formal coalition, like the one Cameron has led for the past five years with the centrist Liberal Democrats. Or it could produce a fragile minority government making trade-offs to guarantee support on key votes.

Of seven opinion polls released on the last day before voting, three showed the two main parties tied. Three put the Conservatives ahead by a single percentage point, and one gave Labour a two-point lead.

Leading pollster Peter Kellner of YouGov predicted the Conservatives would end up with 284 seats to Labour's 263, with the Scottish Nationalists on 48, Liberal Democrats 31, the anti-European Union UK Independence Party (UKIP) two, Greens one, and Welsh and Northern Irish parties 21.

If that proved correct, either of the two big parties would need support from at least two smaller ones in order to get laws through parliament.

If a durable government could not be formed, Britain could face political instability and even possibly a second election.

In 2010, many in the United Kingdom projected huge gains by the Conservatives under Cameron, but knew it would most likely result in a hung parliament–where no side clinches 326 seats to form a majority government. As it turned out, the Conservatives fell 20 seats short of that magic number (306 seats), ending with a coalition agreement with the Liberal Democrats (57 seats) under Nick Clegg.

Now, FiveThirtyEight–doing penance for not enough coverage of the Scottish Referendum–has devoted a large portion of its site to the 2015 UK Elections. Regarding the issues, immigration seems to be the top concern of UK voters–with the National Health Service and the economy rounding out the top three. Nevertheless, the parties do lean more to the left over there, which is to be expected:

Disagreements about the scope of government underlie the classic divide between the Conservatives and the Labour Party on most issues, including taxation, benefits, pensions, education and health care provision. These issues will be very much at the center of the campaign, not least because the Conservatives and Labour will be doing their best to remind voters that they have traditionally voted for one of those two parties because of their stances on them:

So, the coalition is dead*? From the numbers crunched by Reuters and FiveThirtyEight, the number of new Conservative-Liberal Democrat members of parliament (MP) would amount to 315 seats, a tad short of 326. It’s possible that the Conservatives could form a minority government, though it's typically a less stable form of governance than the other outcomes (via AP):

Harry Enten wrote that UK polling is "boring," but less volatile than in American elections, but they’ve been wrong in past elections.

In 1990, Margaret Thatcher resigned as British Prime Minister–John Major took her place–and Labour seemed destined to win the 1992 election under Neil Kinnock. During Kinnock’s tenure as leader of the Labour Party that began in the 1980s, he began purging elements of the Trotskyite Militant Tendency that had attached themselves like barnacles onto Labour in the late 1970s, plunging the left-of-center party into the political wilderness for almost two decades. The 1983 UK election saw the Labour Party reach a nadir in their electoral performance in the modern era; Conservatives netted 397 seats–a 144-seat majority–at the end of this abject shellacking.

While many polls had Labour winning the 1992 election, Major and the Conservatives prevailed, clinching the largest number of votes in British history, albeit with a slim majority government. It was a 1948 Dewey-Truman moment for the UK. Nevertheless, this slim majority would eventually cause Major political headaches, as members of his own party had their reservations about the emerging European Union and the Maastricht Treaty. By 1997, the Tories were washed away by Tony Blair landslide victory.

We shall see what happens. If you’re insane, like me, it’s going to be a long night. Most likely, we’ll have to wait a couple of days until the votes in all 650 constituencies are tallied, let alone find out what sort of government will come out of this election.  One thing is certain–and that is if Cameron fails to win a second term, the Tories are sure to dump him as their leader.

*For anyone who is better versed in British government, feel free to correct me on anything. I don’t mind adding updates/corrections.