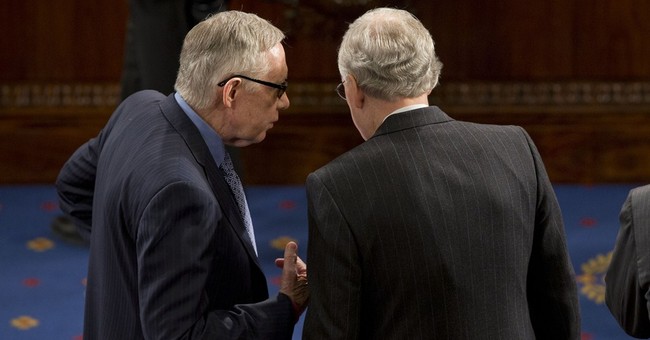 The debate over renewal of fast track trade authority and the Trans-Pacific Partnership (TPP) has caused a rift within the Democratic Party. The Partnership is the latest free trade agreement ten years in the making between the United States, Australia, Brunei Darussalam, Chile, Malaysia, New Zealand, Peru, Singapore, and Vietnam–and it received a chilly reception from Democrats at the State of the Union this year. Democratic concerns include giving the president “fast track” authority, which would allow the president to negotiate the deal faster, give it to Congress for approval, but prevents them from amending the deal. That's one of the points of contention.

It’s a big deal. The nations involved with the agreement constitute 40 percent of the world’s GDP and while large constituencies of the Democratic Party–labor unions, environmentalists, etc.–are against it due to its impact on American workers; the Economist noted that the North American Free Trade Agreement really didn’t impact the labor market–the same goes for TPP. Nevertheless, some of the biggest names on the progressive wing of the party, like Sen. Elizabeth Warren (D-MA), have noted the deal would exacerbate income inequality. Obama has flatly said that she’s “wrong.”

Luckily, a deal over the TPP regarding fast track was made in April, Congress will have more access to the language of the deal, and those who support it received invites to the State Dinner when Japanese Prime Minister Shinzo Abe visited Washington D.C. last week.

Yet, Sen. Harry Reid (D-NV) is digging in on his “hell no” opposition to TPP–and it’s beginning to irritate lawmakers on both sides of the aisle (via Politico):

Pro-trade lawmakers in both parties expressed irritation with Sen. Harry Reid on Monday after the Nevada Democrat said he would block any new trade deals until Republicans approve new infrastructure legislation and reform the PATRIOT Act.

The Senate minority leader said in an interview with The Huffington Post that he isn’t “willing to lay over and play dead on trade” until he has assurances that Senate Majority Leader Mitch McConnell (R-Ky.) will deal with deadlines on transportation and surveillance legislation, both of which expire at the end of the month.

“McConnell said he wanted to move to trade in the next two or three weeks … but I don’t think he’s going to have an easy time doing it, because I will not let him do that,” he said in the interview. “He’s going to have to work around me and the caucus.”

Senate Finance Chairman Orrin Hatch (R-Utah), who worked with ranking member Ron Wyden (D-Ore.) on trade promotion authority legislation that’s drawn some Democratic support, said if Reid follows through on his threat to whip against the measure he will only be hurting President Barack Obama.

Reid will need to keep a tight grip on his caucus to fend off approval of the fast-track trade bill, and not all Democrats are ready to filibuster the measures. Republicans need to pick off at least six Democrats to break a filibuster, possibly against the wishes of Reid’s whipping operation later this month.

“That’s not my preference,” said Sen. Bill Nelson (D-Fla.) of Reid’s strategy. He added that he will vote to break a filibuster on the fast-track bill.

Reid had told Politico last year that he’s “not going to stand in the way” of the president in trying to get trade deals sealed.

Yet, it’s still a minefield for the Obama White House, who will owe Republicans a huge favor if this deal is approved. For one, 151 House Democrats–more than half the caucus–signed a letter opposing fast track and the TPP, according to the Washington Post:

The resistance could complicate things for Obama on two fronts. First, any sign of serious opposition in Washington will make countries involved in the talks nervous that the American president can't seal the deal back home. But second -- and more importantly for The Fix's purposes -- Obama has to balance his desire to get a deal with the political needs of congressional Democrats, dozens of whom run the risk of losing their seats in November.

In the Senate, all eyes are on Democratic Sens. Patty Murray (D-WA), Tim Kaine (D-VA), Sen. Dianne Feinstein (D-CA), and Sen. Jeanne Shaheen (D-NH). While theoretically Republicans need six votes, they’re down a few votes on their own side; Sen. Richard Burr (R-NC), who’s running for re-election in 2016, opposed the bill in committee, according to Politico, citing the possible detrimental impact on the state’s textile industry.

Also, Sen. Richard Shelby (R-Al), Sen. Jeff Sessions (R-AL), and Sen. Lindsay Graham (R-NC) have opposed it before during the Bush administration. The publication noted that Sessions and Graham could vote nay again; Sen. Shelley Moore Capito (R-WV) has yet to make up her mind. Still, Sen. John Thune (R-SD) is confident that 65 votes will be there for TPP.

So, while there are divisions over this bill, it’s mostly on the Democratic side, it certainly carries a more bipartisan flavor than past bills, and Republicans–overall–are supportive of the deal.

Still, there are some grumbles about environmental policy and transparency (via the Economist):

Other parts of the TPP will irk greens. In recent months America seems to have softened its language on the environment, possibly to win over poorer trading partners.

The TPP might not be so controversial if talks were conducted openly. Jeffrey Schott of the Peterson Institute, a think-tank, argues that although negotiators need input from those who will be affected—including businesses and trade unions—making the negotiations public might make it difficult to balance the demands of competing interest groups. However, secrecy may now be so strict that it ends up irritating everyone. In an attempt to make the plan stick, senior Democrats say that a final trade agreement must be subject to public consultation before Congress votes.

Economists worry that cluttering up trade pacts with rules about labour, greenery and currencies dilutes the benefits of free trade and gives its opponents extra tools to block the deals entirely. However, there is scant chance of getting any deal through Congress without such sweeteners.

Yet, while there might be an argument that free trade and globalization have hamstrung wage increases for the middle/working class, the publication also noted that it has increased Americans’ purchasing power by $10,000, and given us better, cheaper goods.

Congressional Democrats wondered where Hillary stood on TPP.  She has apparently sided with Sen. Warren.

Last note: Reid told the Huffington Post that he has never supported a trade agreement in the 33 years he's been in Congress.  "They're not good for the American people. They're not good for working men and women. It puts us at a disadvantage," he said.

Just wanted to clarify his staunch opposition to the TPP.