Can We Retire The Term 'Permanent Majority' From Politics? 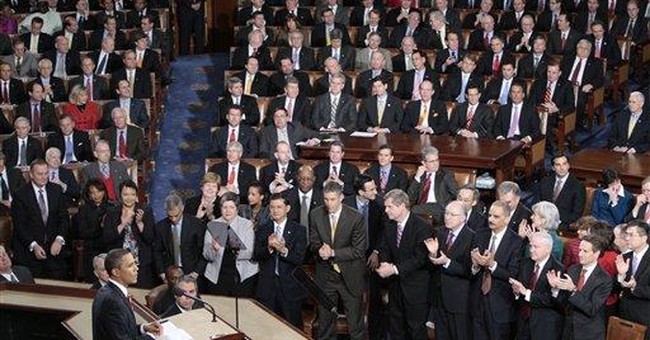 We keep hearing about the emergence of permanent Democratic majorities from the strategists, advisers, and chairmen of both political parties. It’s pervasive–and couldn’t be further from the truth. We’re a government based on public opinion. Public opinion is shiftable sand, as George Will and the late Sen. Barry Goldwater have said previously. The latest person to mention this unicorn of a political theory is New York magazine’s Jonathan Chait, who argued earlier this month that such an electoral phenomenon was one of the reasons why Hillary Clinton will win in 2016.

1. The Emerging Democratic Majority is real. The major disagreement over whether there is an “Emerging Democratic Majority” — the thesis that argues that Democrats have built a presidential majority that could only be defeated under unfavorable conditions — centers on an interpretive disagreement over the 2014 elections. Proponents of this theory dismiss the midterm elections as a problem of districting and turnout; Democrats have trouble rousing their disproportionately young, poor supporters to the polls in a non-presidential year, and the tilted House and Senate map further compounded the GOP advantage.

Skeptics of the theory instead believe that the 2014 midterms were, as Judis put it, “not an isolated event but rather the latest manifestation of a resurgent Republican coalition.” Voters, they argue, are moving toward the Republican Party, and may continue to do so even during the next presidential election.

It has been difficult to mediate between the two theories, since the outcome at the polls supports the theory of both the proponents and the skeptics of the Emerging Democratic Majority theory equally well.

He also added that “youngsters” aren’t shifting to the right. That’s true. But as Guy pointed out this morning, the Harvard University's Institute of Politics’ poll showed the gap has closed between Millennials favoring a Democrat over a Republican (55/40) since 2008 (66/32) and 2012 (60/37). Yet, on policy matters, young people tend to favor school choice, tax cuts to expand the economy, and reject affirmative action initiatives. Then again, they feel health care is a human right, and support measures to combat the phantom threat of climate change. Guy noted that the results of the poll are mixed, but it shows that there are many avenues from which the GOP can make inroads with this voter bloc.

Megan McArdle of Bloomberg was more skeptical of this emerging majority hypothesis as well. Besides Republicans coming back in 2010 and 2014, she went back all the way to 1976 and 1980, noting who at the time of Carter’s electoral victory thought a Republican would absolutely destroy him after just one term. She added, “The bigger your coalition, the bigger its internal tensions. Coalitions can collapse suddenly and without warning.”

Also, McArdle touched upon the women’s vote. Yes, Democrats will probably win women again in 2016, but their failure with male voters could neutralize any gains Clinton needs to make beyond, young, college-educated single women:

Clinton seems to be planning a platform heavy on items designed to appeal to female voters, such as paid family leave. But these actually appeal to a pretty narrow segment of the population -- young single women, and those with small children -- where Democrats already do really well. There's the risk that these gain her voters among folks who are already strong Democrats while costing her votes in segments she needs to pick up. Especially since any serious promise of these things is going to have to come with a plan for paying its hefty price tag.

Another aspect that cuts into the Emerging Democratic Majority thesis is the diaspora of white voters from the Democratic Party. Democrats need working whites to retake the House, the Senate, and the White House–and as I’ve written in other posts; it isn’t solely a southern problem. Republicans have two-thirds of the governorships, the largest House majority in over seven decades, and the most state legislative seats since 1920. The Obama era has witnessed the complete decimation of Democrats at the state and local level; a critical point since this is where the new talent is cultivated and nurtured to fill the ranks of the aging Democratic leadership in Congress. It’s so bad that Clinton has made it one of her rebuilding projects if she wins in 2016. It’s going to be a hard journey since only 30 percent of whites live in an urban setting. The rest are in rural areas and firmly Republican. As Sean Trende of Real Clear Politics  said in 2013 at a Brookings Institution event, working class whites had no party representing their interests in 2012. Mitt Romney didn’t offer them much, and Obama was too liberal. Clinton intends on running towards Obama’s record next year. While Hispanics–and Asians–might become more influential in elections in future elections, their impact is not going to be as profound as many in media circles contend. For starters, their share of the electorate in 2012 was only 10 percent. More blacks than Hispanics participated in the 2012 elections, and any shift in a voting bloc that small isn’t going to have a massive ripple effect in the way whites–who still make up roughly 75 percent of the electorate–do.

As Trende noted, Republicans just needed to nab an additional 3 percent of the white vote in 2012 to get 51 percent of the popular vote, and possibly the presidency.

Bill Clinton was able to resonate with these voters. It remains to be seen with Hillary, who is an exceptionally bad campaigner. Moreover, the top dogs in the Republican field in 2016 are the furthest things from Mitt Romney. It’s much more blue collar, middle class, and reaped the benefits of American social mobility. Heck, Gov. Scott Walker–our potential 2016 nominee–is in debt.

Additionally, Nate Cohn of the New York Times–who Chait references-noted that Republicans have been making steady gains with Catholic voters, who usually broke evenly between the two parties.

The last note in Cohn’s piece strikes at the heart of the problem when either side declares permanent electoral majorities. It’s still very early to tell, but while Millennial whites lean Democratic, nonwhites is where Democratic Party seems to be becoming a little soft (via NYT):

There is, however, one intriguing weak spot for Democrats among the youngest millennials: minorities. While young whites are far more Democratic than their elders, the youngest nonwhite adults tend to be somewhat more Republican.

According to the Pew data, 17 percent of 18- to 25-year-old black adults lean Republican — far more than any other age group among blacks. The sample is small — just 354 black adults between the ages of 18 and 25 were queried — but it is not the only piece of evidence supporting this possibility. In the 2012 exit polls, just 80 percent of black men 18 to 29 supported Mr. Obama, although the number of respondents was quite low.

The Pew data isn’t enough to definitively state that Republicans fare better among the youngest nonwhite voters, but it’s something to keep an eye on.

So, can we retire this term from American politics? Without a doubt, there can be the emergence of a long-standing coalition in politics. Democrats held the House of Representatives–and more or less dominated national politics–for nearly six decades before Republicans had their revolution in 1994. It was a killing field for Democrats. Now, Republicans possibly have a lock on the House for the next generation.

As for the turnout rebuttal from the left regarding the 2014 midterms, I direct you to Mr. Trende again. If 2014 turnout levels matched that of 2012 in terms of age and racial background, the Republican edge would only be cut by a small margin. It still would have been a rough night for liberals [emphasis mine]:

If the 2014 electorate had resembled the 2012 electorate in terms of race, the Republican vote share would shrink by just 1.97 percentage points. In other words, in a 2012 electorate, Republicans would have won the popular vote for the House by 4.5 points, rather than 6.5 points. That’s not nothing, as they say, but it still only explains a relatively small share of the difference between the 2012 and 2014 results. Put differently, if Obama had put up the same vote shares among racial groups in 2012 as Democrats ultimately did in 2014, he’d have lost.