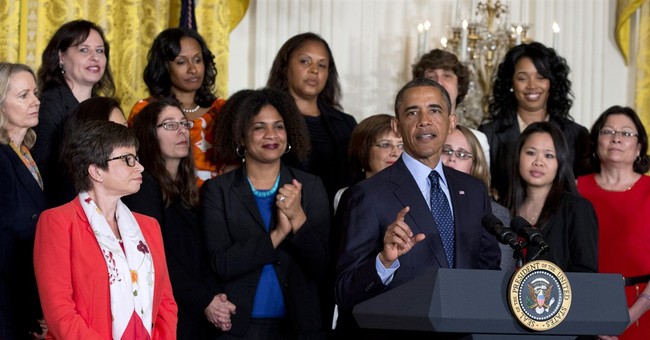 It’s the feminist left’s favorite issue: equal pay. The inaccurate 77¢ statistic gets replayed over the airwaves, and the false war on women narratives get rehashed. Of course, no one is for wage discrimination. Well, at least sentient beings are not for justifying pay discrepancies based on gender. There are two federal laws on the books that prohibit pay discrimination based on gender. Also, American women are killing it, but it appears those leading the feminist charge are more content with Perpetual War theory than acknowledging that the pay gap has an expiration date–and that young women today have virtually wiped it out.

Let’s discuss the laws that prohibit pay discrimination. Before President John F. Kennedy was assassinated in 1963, he signed the Equal Pay Act into law:

(1) No employer having employees subject to any provisions of this section shall discriminate, within any establishment in which such employees are employed, between employees on the basis of sex by paying wages to employees in such establishment at a rate less than the rate at which he pays wages to employees of the opposite sex in such establishment for equal work on jobs the performance of which requires equal skill, effort, and responsibility, and which are performed under similar working conditions, except where such payment is made pursuant to (i) a seniority system; (ii) a merit system; (iii) a system which measures earnings by quantity or quality of production; or (iv) a differential based on any other factor other than sex: Provided, That an employer who is paying a wage rate differential in violation of this subsection shall not, in order to comply with the provisions of this subsection, reduce the wage rate of any employee.

(2) No labor organization, or its agents, representing employees of an employer having employees subject to any provisions of this section shall cause or attempt to cause such an employer to discriminate against an employee in violation of paragraph (1) of this subsection.

(3) For purposes of administration and enforcement, any amounts owing to any employee which have been withheld in violation of this subsection shall be deemed to be unpaid minimum wages or unpaid overtime compensation under this chapter.

(4) As used in this subsection, the term “labor organization” means any organization of any kind, or any agency or employee representation committee or plan, in which employees participate and which exists for the purpose, in whole or in part, of dealing with employers concerning grievances, labor disputes, wages, rates of pay, hours of employment, or conditions of work.

It shall be an unlawful employment practice for an employer -

(1) to fail or refuse to hire or to discharge any individual, or otherwise to discriminate against any individual with respect to his compensation, terms, conditions, or privileges of employment, because of such individual’s race, color, religion, sex, or national origin; or

(2) to limit, segregate, or classify his employees or applicants for employment in any way which would deprive or tend to deprive any individual of employment opportunities or otherwise adversely affect his status as an employee, because of such individual’s race, color, religion, sex, or national origin.

It shall be an unlawful employment practice for a labor organization-

(1) to exclude or to expel from its membership, or otherwise to discriminate against, any individual because of his race, color, religion, sex, or national origin;

(3) to cause or attempt to cause an employer to discriminate against an individual in violation of this section.

Right now, young women are out-earning their male peers in urban areas; a statement confirmed as “mostly true” by left-leaning Politifact. The Wall Street Journal  reported how well young American women were doing five years ago. This isn’t news; some studies show that women earn the same amount of money as men (via MarketWatch):

American women are winners, although it’s hard to believe from the Equal Pay Day rhetoric. Department of Education data show that in 2012, the latest available, they earned 57% of bachelor’s degrees, 60% of master’s degrees and 51% of doctorates, as well as almost half of doctor of medicine and law degrees. The unemployment rate for adult women, at 4.9%, is now lower than that for adult men, at 5.1%.

The latest figures show that comparing men and women who work 40 hours weekly yields a wage ratio of 90%, even before accounting for different education, jobs or experience, which brings the wage ratio closer to 95%. Many studies, such as those by Professor June O’Neill of Baruch College and Professor Marianne Bertrand of the University of Chicago, show that when women work at the same jobs as men, with the same accumulated lifetime work experience, they earn essentially the same salary.

The changing job market has certainly allowed women to adapt and increase their economic influence in America’s job market. From this infographic from NerdWallet, you can see how male-dominated jobs are on the decline, while sectors of the economy where women rule have increased substantially. Gentlemen, the days of not obtaining a college degree and making it into the middle class through construction and manufacturing are coming to a close.

Yet, there are many ways to cut the pay gap data. According to Pew Research, young women now make 93¢–not 77¢–for every dollar made by their male peers. That’s “essentially the same.” Moreover, each new bloc of young women has increased their earnings in five-year intervals starting from 1980. While the overall gap for women in the workforce is now around 84¢ for every dollar men make, it used to be 64¢ in 1980. It’s tremendous progress. Yet, there are a number of reasons why a pay gap still exists:

Even though women have increased their presence in higher-paying jobs traditionally dominated by men, such as professional and managerial positions, women as a whole continue to work in lower-paying occupations than men do. And some part of the pay gap may also be due to gender discrimination –women are about twice as likely as men to say they had been discriminated against at work because of their gender (18% vs. 10%).

Caring for a family member or raising a child shouldn’t be blamed for pay gap disparity, nor should picking a field of study that doesn’t necessarily yield high pay upon entering the job market. Yet, when it comes to discrimination, it should be challenged–and women have existing federal laws they can cite in any potential lawsuit they may file if they feel shortchanged in the workplace.

In all, it’s already against the law to pay someone less based on gender. As for the pay gap, there are many ways to cut it, and it’s not a black and white issue. But American women are rising–and the gap is closing. So, can we retire the 77¢ myth?