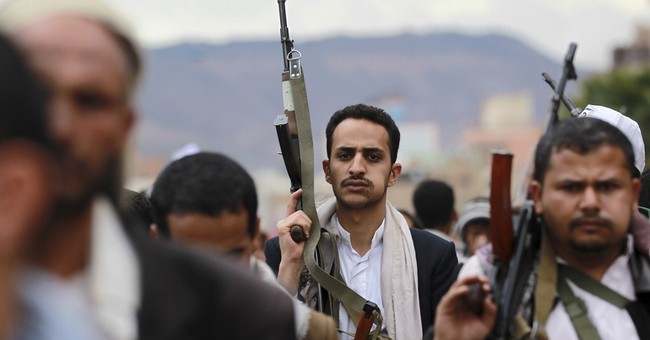 Ground troops from the Arab League could be moving into Yemen to fight the Shiite Houthi rebels that have forced President Abdu Rabu Mansour Hadi from the capital Sanaa and the southern city of Aden. Hadi was reportedly trying to rebuild his power base there after escaping house arrest. The embattled president was able to go to the Egyptian resort town of Sharm el-Sheikh to attend an Arab League summit, according to CNN:

[Arab League] Support is already broad. The coalition nations participating in the bombardments make up about a third of the league's membership.

On Saturday, Hadi called the Houthis out: "You violated the sovereignty (of Yemen), and you bear the responsibility for what happened and what is going to happen."

Saudi naval special forces have also rescued dozens of diplomats, the official said. And many U.N. representatives have fled the unrest.

Saudi Arabia has set up a blockade, effectively cutting off Houthi supply lines, and its air force controls Yemeni airspace. They have threatened to attack ships that might supply the rebels.

Concerning the strategic situation, the rivalry between Saudi Arabia and Iran encapsulates the Sunni-Shiite schism, which often times has led to violence between the competing sects of Islam. Saudi Arabia, which sees the Houthis as being backed by Iran–they did send a delegation to Tehran–can’t have an Iranian satellite state on their border:

Iran and Saudi Arabia are bitter rivals. Having Yemen become an Iranian satellite country on its border would be unacceptable to the kingdom.

And two Arab League members, Lebanon and Iraq, have voiced opposition to Determination Storm [the current air campaign against the Houthis], Lee reported. Both countries are majority Shiite.

In all, a force of about 40,000 men from the Arab League could be heading into Yemen. The United States has been providing logistical support for the airstrikes as well (via the Hill):

The Arab League on Sunday decided it would build a joint military force featuring combat units from each of its 22 member nations.

It would likely boast 40,000 elite troops backed by light armor and mechanized air and naval power, he added.

The Al Arabiya network said the league declared any member state could request the joint military if its security was threatened. The league would then act if the situation warranted combat, Al Arabiya concluded.

The league’s first potential battleground might be in Yemen, which is currently tangled in a fierce civil war. Yemeni President Abed Rabbo Mansour Hadi on Tuesday fled his hometown of Aden as Shiite Houthi rebels advanced on his position.

The embattled leader next retreated to Saudi Arabia, another league member, Wednesday. The Sunni government in Saudi Arabia has since conducted air strikes on the rebels, hoping it will prevent the Houthis from partnering with its Shiite rival, Iran.

The Obama administration revealed on Wednesday it is providing logistical and intelligence support to the Saudi military campaign. It has additionally ruled out direct military intervention, despite its close alliance with Hadi’s former government.

CNN added that Saudi Arabian officials have insisted that if an invasion occurs, they won’t leave Yemen until the rebels’ fighting capabilities are irrevocably crippled. That being said, the publication noted that the Houthis are skilled guerrilla fighters that could turn this incursion into a bloody affair.

Yemen had been used by this administration as a blueprint for future counter-terrorism operations. When the country continued to devolve into chaos, this administration maintained that position. Even Vox knew better, as this post shows, as they pretty much took Obama’s foreign policy to the woodshed.