Rumor Mill: Rubio Could Announce His Presidential Run on April 13 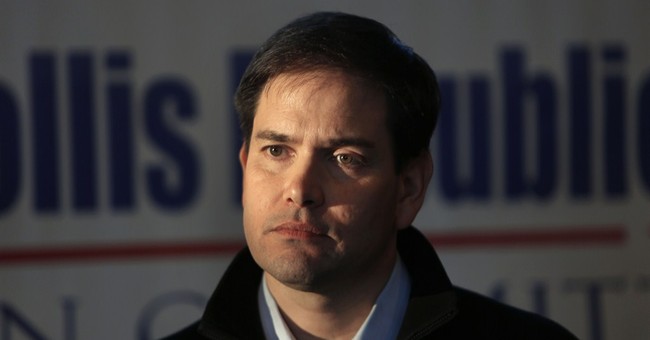 Dan has been following the 2016 rumblings being made by Florida Sen. Marco Rubio. He’s reportedly “frustrated” with the Senate, and doesn’t plan to run for re-election. Polling shows the young Republican can be a formidable force next year. He’s also been courting Romney and his donor network, which–if successful–could shift things in his direction.

Now, the Freedom Tower in Miami has been reserved for an event on April 13, which could be where Sen. Rubio makes his 2016 intentions official (via Tampa Bay Times):

A Rubio adviser stressed nothing has been nailed down for any kind of announcement, but the timing makes sense: Likely presidential candidate Rand Paul is expected to make things official April 7, to be followed by a five-day, five-state announcement tour, so Rubio presumably would not want to share the spotlight during that period.

All-but-announced candidate Jeb Bush appears to be in no rush to shift more formally into campaign mode, but Texas Sen. Ted Cruz made his announcement this week and Democrat Hillary Clinton is expected to make her campaign announcement in April as well, though nothing has been set.

Rubio, 43, has been preparing for a potential presidential run for at least a year. While behind in most early polls, he has generated considerable buzz as a top-tier contender who offers the party a fresh face, foreign policy experience, charisma and substance.

The Freedom Tower, a Mediterranean Revival landmark beside Biscayne Bay, is apparently one of several venues under consideration by Rubio, but it could be an ideal postcard setting to kick off a presidential campaign promoting the promise and greatness of America by the son of Cuban immigrants.

The building is reserved for 5:30 p.m. that Monday, which also happens to be Thomas Jefferson's birthday.

Over at FiveThirtyEight, Nate Silver wrote that Sen. Rubio has a path to the nomination, noting that his numbers in Iowa aren’t bad, and that his relative anonymity with the general electorate allows him to shape his image. He also has some of the best approval ratings in the 2016 field, which overall, aren’t good. At the same time, Gov. Scott Walker has many of the same qualities as Rubio:

There’s still plenty of room for Marco Rubio. Two years ago, I described the Florida senator as the “electable conservative.” While Rubio has taken fewer tangible steps toward officially running for president than rivals like Jeb Bush and Scott Walker, he still does reasonably well by that rubric. Perhaps along with Walker, he can make the most credible case for meeting William F. Buckley’s standard as the most viable conservative candidate.

He’s quite conservative, but not ultraconservative — instead he’s close to the median of Republicans who have been elected to Congress in recent elections.

Another way is to talk to Republican voters directly — or at least to poll them, as The Des Moines Register and Bloomberg Politics recently did in Iowa. That poll asked potential Republican caucusgoers whether they saw each of their candidates as “too conservative,” “too moderate” or “just right.” I’ve re-created that data below, removing voters who said they weren’t sure about the candidate from the sample.

These numbers look really good for Walker. Among voters with an opinion about him, 85 percent rated his ideological views as “just right,” the highest in the Republican field. But Rubio isn’t far behind; 74 percent of voters described him the same way, placing him in a tie for third place with Perry.

Rubio and Walker, being lesser known, have more chance to shape their image. And they can make some electability arguments of their own. In Rubio’s case, it’s about being a Hispanic candidate from a swing state with a good life story; in Walker’s, it’s about having been elected in a blue-leaning swing state three times in four years.

They also have vulnerabilities. Walker so far has not gotten a great reception from the mainstream media, which is fond of playing up the “crazy tea partyer” characterization of him. Pushing back against alleged or actual media bias is a part of the Republican playbook, but it requires some dexterity; it worked well for George W. Bush but not so well for Sarah Palin in the end, for instance. Rubio, for his part, has not shown a lot of political dexterity either, having lost more than he gained when he advocated for immigration reform.

Silver ends his analysis by saying that Republican primary voters could push Bush to the side easily in the primaries, leaving Rubio and Walker fighting for the nomination.

We shall see what happens. Then again, Rubio and Cruz running in 2016 undercuts the narrative we’ve been disseminating about Obama, which centered on him being a one-term senator with no experience before he ran and won in the 2008 election.

Regardless, with Cruz and the probable Rubio and Paul presidential announcements coming shortly next month, the Tea Party GOP is the point of the lance for the GOP in 2016–for now.