GALLUP: Yeah, That 5.6% Unemployment Figure Is A Lie 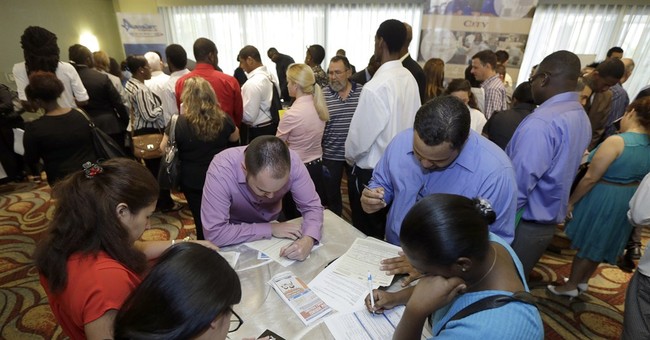 A nauseating State of the Union address from Barack Obama has come and gone, and a triumphant Obama (yeah, I don’t why he feels that why either) said that the country has turned the page:

Tonight, after a breakthrough year for America, our economy is growing and creating jobs at the fastest pace since 1999. Our unemployment rate is now lower than it was before the financial crisis. More of our kids are graduating than ever before. More of our people are insured than ever before. And we are as free from the grip of foreign oil as we’ve been in almost 30 years.

Finally, Gallup has pointed out that this is highly misleading. Reports will show the unemployment rate is at 5.6 percent, but it’s hardly worth celebrating about once it’s all broken down:

If you, a family member or anyone is unemployed and has subsequently given up on finding a job -- if you are so hopelessly out of work that you've stopped looking over the past four weeks -- the Department of Labor doesn't count you as unemployed. That's right. While you are as unemployed as one can possibly be, and tragically may never find work again, you are not counted in the figure we see relentlessly in the news -- currently 5.6%. Right now, as many as 30 million Americans are either out of work or severely underemployed. Trust me, the vast majority of them aren't throwing parties to toast "falling" unemployment.

There's another reason why the official rate is misleading. Say you're an out-of-work engineer or healthcare worker or construction worker or retail manager: If you perform a minimum of one hour of work in a week and are paid at least $20 -- maybe someone pays you to mow their lawn -- you're not officially counted as unemployed in the much-reported 5.6%. Few Americans know this.

Yet another figure of importance that doesn't get much press: those working part time but wanting full-time work. If you have a degree in chemistry or math and are working 10 hours part time because it is all you can find -- in other words, you are severely underemployed -- the government doesn't count you in the 5.6%. Few Americans know this.

There's no other way to say this. The official unemployment rate, which cruelly overlooks the suffering of the long-term and often permanently unemployed as well as the depressingly underemployed, amounts to a Big Lie.

Gallup defines a good job as 30+ hours per week for an organization that provides a regular paycheck. Right now, the U.S. is delivering at a staggeringly low rate of 44%, which is the number of full-time jobs as a percent of the adult population, 18 years and older. We need that to be 50% and a bare minimum of 10 million new, good jobs to replenish America's middle class.

So, here’s to Obama’s America.