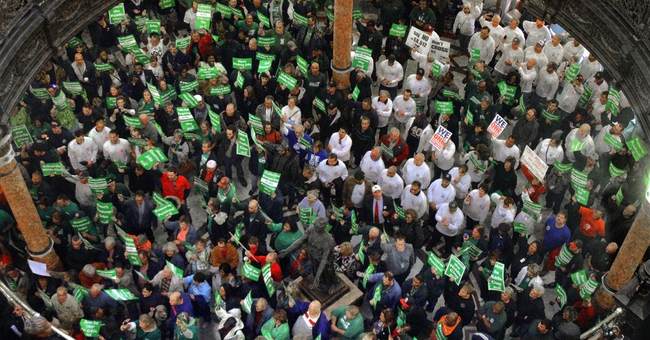 Politically, West Virginia is a weird state. It’s a state that votes Republican in national elections–Obama didn’t win a single county in 2012–but is dominated by Democrats at the state level. Well, last year, Democratic dominance in the Mountain State ended when Republicans took control of both chambers in the state legislature for the first time in 80 years. Since 2000, West Virginia has become more Republican.

With their new majority, Republicans are working to bring right to work legislation to the state. An ironic development given that the state once was a bastion of organized labor, yet in recent years; union membership has declined. The bill will prevent the forced payment of union dues.

This bill isn’t without opposition, West Virginia’s AFL-CIO is going to fight this bill, saying it’s anti-union, and will reduce workers' pay. They’re planning a two-day conference in Charleston next week.

On January 27, WV AFL-CIO President Kenny Perdue seems to think the bill–SB 337–is an attack on unions, but then said two days later that the essence of the right to work legislation being debated is virtually law already, or something:

Perdue said the proposed legislation is “absolutely an attack on unions” because they are the “last line of defense for the workers in this country.”

When asked to respond to Republicans’ claims that the legislation is about freedom, Perdue spoke plainly, saying, “They’re f---ing liars.

“Workplace freedom is a line of BS,” he said. “It has nothing to do with workplace freedom. It’s employer freedom to do at will what they want to do to employees — that’s all it is.”

On January 29, while Perdue was debating State Senate Majority Leader Mitch Carmichael, who was saying that no employee should be forced into becoming a due-paying union member for work, Perdue said [emphasis mine]:

“They already have that,” Perdue argued.

Carmichael asked, “Well then, why are you opposed to this position then?”

“The law is already there. The law already says that you don’t have to be a union member,” Perdue answered. “What Right To Work does is force the union that is in there, which the union is there because the majority of them voted, the employer has accepted that through NLRB election, but that person that comes in there can sit back and get the benefits of all that and not pay the union dues.”

Given the use of strong language, maybe Mr. Perdue is just upset that membership in organized labor has reached its lowest levels in 100 years.

James Shrek of the Wisconsin State Journal  wrote last December on why right to work legislation is needed:

These states have good reason to pass right-to-work laws. They expand personal freedom. Without them, union contracts force workers to pay dues or get fired. This compels workers to pay hundreds of dollars annually to organizations whose agendas they often oppose. Last year, for example, several major unions donated to America’s largest abortion provider. Their members had little say in the matter.

Mandatory dues also drive businesses away. Union organizers become much more persistent in states without right-to-work. In those states a successful organizing drive means a perpetual stream of forced dues from every employee. Most companies, however, would prefer not to get unionized. The prospect of aggressive organizing causes them to take their businesses elsewhere.

As economic development consultant David Brandon explains, “More than half of our companies either make it a threshold or a very important factor in making a decision on where to locate a factory and other operations.” The foreign transplant automakers did not accidentally locate almost entirely in right-to-work states.

Union bosses do not.

If this law passes, West Virginia will be the 25th right to work state.