Bush To Romney: Hey, Let's Talk About How We Can Avoid A 2016 Bloodbath 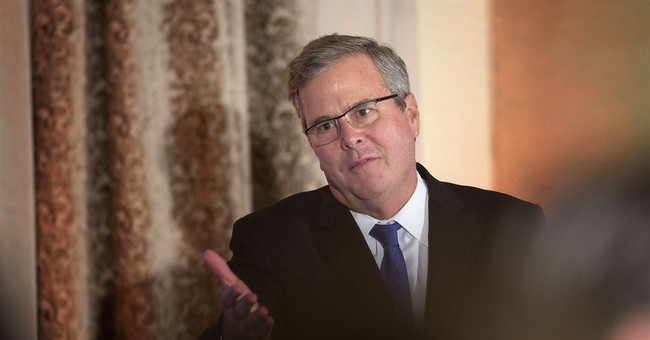 For those in the conservative wing of the GOP, your suffering shall continue; Romney and Bush are meeting privately in Utah to discuss how they avoid splitting the establishment–and an expensive bloodbath–before the 2016 season kicks into high gear (via NYT):

The meeting was planned before Mr. Romney’s surprise announcement two weeks ago to donors in New York that he was considering a third run at the White House.

Mr. Bush initiated the meeting, according to one of the party members familiar with the planning.

The original idea was for Mr. Bush — who announced his own presidential ambitions in December — to show his respect for the Republican Party’s 2012 nominee. It stayed on both men’s calendars even as Mr. Romney took steps to test the presidential waters himself, moves that could make the meeting awkward.

Aides to Mr. Romney and Mr. Bush did not reply to requests for comment.

The talks come as both men have been making a flurry of phone calls to Republican donors and officials to sound them out and gather commitments ahead of what could be a bruising primary race.

In some cases, Mr. Bush and Mr. Romney are calling the same people just hours apart. Many of the contributors and elected officials they are courting are hoping to stave off a collision between the two that could imperil the party’s chances in a general election.

Mr. Bush, a former Florida governor, and Mr. Romney, who was governor in Massachusetts, are neither friends nor adversaries. But Mr. Bush offered little help to Mr. Romney in his 2008 and 2012 presidential campaigns, and tensions have grown since Mr. Bush said that he was exploring a presidential bid.

Both men are ranked at the top of the 2016 GOP field. Romney and Bush share some of the same strengths as indicated by the New York Times’ Jonathan Martin. They can both raise enormous amounts of money–and they enjoy name recognition amongst the Republican base. Yet, Romney is a two-time loser, who cannot talk about health care. And Bush hasn’t really been in the game since 2002.

Both men also have to deal with the stigmas to their respective names. While George W. Bush has somewhat rehabilitated his image since leaving the White House, the Bush name isn’t exactly the one Americans have in mind to replace Mr. Obama after 2016. Also, if Hillary does run, many pundits have noted that the ability to cast her as out-of-touch with the average voter goes out the window if Republicans nominate a member of a political dynasty in 2016. Additionally, we might see a narrative comparing the Clinton and Bush White Houses–and what they yielded for the American people.

Romney will have to answer (again) for the 47 percent comment, be mocked for his “binders full of women” remarks, and his statements about self-deportation. During the 2012 election, Romney’s communications team was on the defensive from the spring of that year until Election Day; we shouldn’t expect Team Romney then to be much better maneuvering to neutralize these old attacks. Remember, they failed at responding to the ad where Joe Soptic, a GST Steel employee who was laid off when Bain Capital acquired the company, blamed Romney in the death of his wife.

Of course, the ad was a hit job, and pretty much false, but CNN did a better job tearing it apart than Romney’s team, who touted Romneycare as part of their rebuttal.

If Romney runs again, he will start as he did in 2012: a fragile frontrunner. Jeb could surprise the field if he’s able to maneuver and quell the conservative furor over his comments about immigration and Common Core. We shall also see what happens if Walker, Perry, Paul, and Rubio toss their hats into the ring.

But, for now, all eyes are on this romantic RINO rendezvous in Utah.