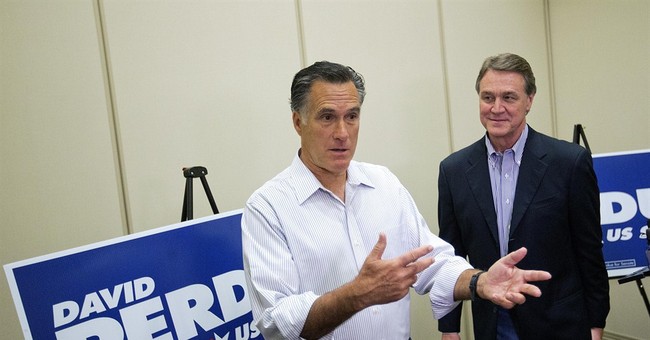 It’s happening. Mitt Romney told donors that he’s considering another presidential run in 2016, but did not list a timetable as to when that decision might become an official announcement (via WSJ):

Former Massachusetts Gov. Mitt Romney, the Republican presidential nominee in 2012, told a meeting of donors Friday that he is considering another White House bid in 2016, people present said.

The possibility of a third Romney bid could upend the emerging GOP field, coming as top Republican donors are starting to rally behind former Florida Gov. Jeb Bush.

Mr. Romney made the remarks during a session Friday afternoon with a few dozen top GOP donors in midtown Manhattan, according to people present.

The former Massachusetts governor didn’t give a timetable for making a decision about another White House run, but he cited unrest overseas as one of the reasons he’s considering another campaign. He also mentioned the long-term health of the economy.

Romney and former Floridian Gov. Jeb Bush are at the top of the current 2016 field, which will inevitably change once Scott Walker or Rick Perry make their intentions more clear as we approach the official campaign season.

Still, health care will be an integral part of the discussion regarding the “long-term health of the economy,” and Mitt Romney is the candidate where we cannot discuss such issues without bringing up Jonathan Gruber and Romneycare.