'Cromnibus' Advances In The House, But Final Vote Delayed 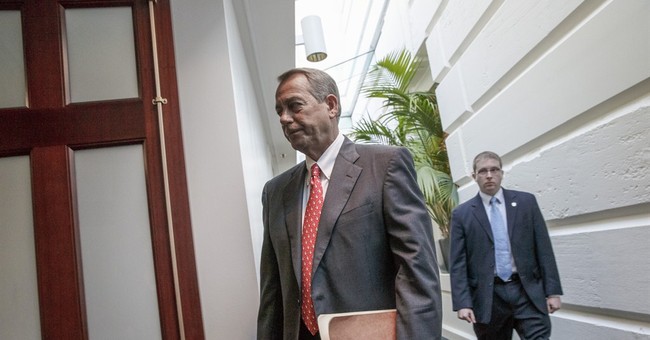 Editor's Note: The original post said that the "Cromnibus" passed and was heading to the Senate.  That was incorrect. The debate for the bill was advanced in the House.  The post has been updated to reflect the corrections.  I extend my sincerest apologies, folks.  It's just one of those days.

In case you were wondering, Massachusetts Democratic Sen. Elizabeth Warren isn’t happy with the upcoming spending bill since it tweaks a provision in the highly intrusive Dodd-Frank law that sought to reform our financial system. Instead, it’s provided banks, businesses, and lawyers with pervasive headaches

Citigroup is holding government funding hostage to ram through its government bailout provision. Join me in opposing the #CitigroupShutdown

Regardless, Warren’s call to her colleagues to torpedo the deal could be a gauge to see how far her influence reaches with fellow Democrats, according to the Hill.

At the same time, Kevin wrote earlier today how the media is reporting on Warren’s stand on this issue; spoiler alert: they’re much nicer to her than Ted Cruz (shocking!)

Yet, some of her like-minded colleagues in the Senate aren’t so sure that they will vote 'no,' despite having strong disagreements with this part of the bill:

Sen. Elizabeth Warren on Wednesday sought to rally opposition to the $1.1 trillion government funding bill, spearheading a revolt on the left that has put her influence in the Democratic Party to the test.

The Massachusetts liberal pleaded for House Democrats to withhold support for a government funding package due to a provision she said would change the Dodd-Frank financial reform law to let “Wall Street gamble with taxpayer money.”

“We’re trying to get it out of the House omnibus bill right now,” she said. “That is where all the pressure is.”

Opposition to the funding deal began to surface early Wednesday morning as lawmakers began sorting through the surprise provisions tucked in the more than 1,600-page funding package.

Even vocal critics in the Senate of the provision, such as Sens. Jeff Merkley (D-Ore.) and Sherrod Brown (D-Ohio), stopped short of promising to oppose it.

The White House, similarly, is not saying whether President Obama would sign the cromnibus, though White House press secretary Josh Earnest said he was “pleased” to see a bill produced.

The change to the Dodd-Frank law has enjoyed bipartisan support in the past.

Republicans and 70 House Democrats voted for a version of the tweak in 2013, with most arguing it would boost economic growth and lessen the regulatory burdens on banks.

“There’s huge misunderstandings about what this thing says,” said Rep. Jim Himes (D-Conn.), who was an early sponsor of the original House bill.

Himes argued that the most dangerous derivatives would still be kept away from government-backed banks under the provision, and that banks would only be allowed to trade “plain vanilla” interest rate swaps.

With no Democratic support in the House, Republicans just needed to avoid losing 18 votes on their side to advance debate rules on the bill, moving one step closer to a vote in order to avoid a government shutdown.

The bill was advanced by a 214-212 vote, setting up a debate on the appropriations.

Right now, the final vote on the spending package was delayed due to uncertainty if it had enough votes for passage (via Roll Call):

Unsure whether they have the votes to pass a trillion-dollar federal spending package, House GOP leaders on Thursday afternoon delayed a final vote on the “cromnibus.”

If Republicans can’t surmount the impasse, they could decide to proceed with swiftly moving a short-term continuing resolution through the chamber, which the Senate could also pass before 11:59 p.m., when current funding expires.

In doing so, they would be throwing away months of hard-fought negotiations between appropriators and dashing dreams of a return to regular order when the GOP takes control of all of Capitol Hill in the new year.

Will this be called the Elizabeth Warren shutdown?