Will Garcia Be A Victim Of Democrats' 'Abortion Distortion' Campaign? 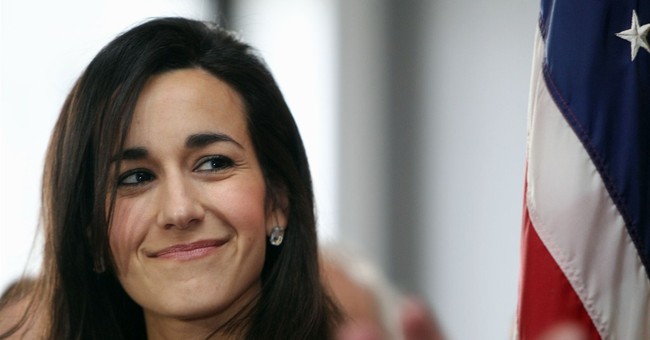 In New Hampshire’s Second Congressional District race, Democratic Rep. Annie Kuster and her GOP opponent, State Rep. Marilinda Garcia, duked it out in one final debate last Tuesday. It was pretty much a repeat of what happened during their last debate; things got testy.

Yet, one thing that the Garcia campaign has been highlighting is Kuster’s lack of town hall events and her liberal voting record. Kuster has tried to paint Garcia as some right-wing extremist who will kowtow to Tea Party Republicans. It may be working. While Garcia has been able to erase some of her polling deficit with the incumbent Democrats, Kuster’s leading by a healthy margin. This “Kill Garcia” strategy seems to be focusing on one thing: abortion. There’s only one problem: Kuster’s claims that Garcia is a pro-life extremist from her record in the state legislature has been easily debunked (via Union Leader):

That is U.S. Rep. Annie Kuster’s plan for defeating Marilinda Garcia, and it seems to be working. Kuster has claimed on television, in debates and in mailings that Garcia has voted to criminalize abortion, with no exceptions for rape, incest or the life of the mother. It is not true, and we have the proof.

On Wednesday [Oct.28] we asked the Kuster campaign for the specific bills Kuster was referring to. They sent us three. The first, House Bill 1660 from 2012, banned abortion after 20 weeks. Late-term abortion bans are broadly popular in the United States, particularly among women, and have been upheld by the U.S. Supreme Court. The Washington Post reported last year that “women are actually more supportive of the law than men.”

Another, House Bill 1679 from 2012, banned “partial birth abortions” (that language was in the title) and contained an exception for the life of the mother. That ban was passed and remains state law. If Kuster were right, abortion would be illegal in New Hampshire right now. The third bill, House Bill 1403 from 2008, would have banned abortion only when the fetus was viable. Again, late-term abortion. The Kuster campaign also noted that Garcia voted in 2007 to keep the state’s parental notification law. But the law required only notification, not consent. Claiming that it amounted to an abortion ban is untrue.

Kuster, a lawyer and former lobbyist, knows how to read bills. She has no excuse for peddling such easily disproven claims. We asked her campaign whether it was misleading to portray votes against late-term and partial-birth abortion as votes against “a woman’s right to choose.” Not surprisingly, the campaign did not respond to defend its false claims — because there is no defense.

One of the ads Kuster threw at Garcia was listed in FactCheck’s article analyzing the “abortion distortion” campaign Democrats have been waging this election cycle:

This ad claims that Marilinda Garcia, the Republican candidate in New Hampshire’s 2nd Congressional District, “voted to make abortions illegal, even in cases of rape and incest.” That’s not true, except for abortions in which a “partially delivered living fetus” is killed.

The ad is sponsored by the Democratic Congressional Campaign Committee. It cites a vote Garcia cast June 27, 2012 on a “partial-birth abortion” bill in the state House of Representatives. The vote was to override the governor’s veto, and Garcia was not alone. Two-thirds majorities in both the House and Senate voted to override, and the bill became law effective Jan. 1, 2013.

It’s true that the “partial-birth” abortion ban allows an exception only for the life of the mother — not for rape or incest. But it doesn’t affect the law applying to the far more common forms of abortion.

As for the latest WMUR Granite State poll, Kuster is leading 53/46 (with leaners) out of a sample of 352 likely voters. Without leaners, Kuster still leads 47/36, but 15 percent of voters are still undecided.

Despite being outspent 5 to 1, Garcia has released this final string of ads and nabbing a Maggie’s List endorsement earlier this month. They are a political action committee dedicated to electing conservative women to public office. In their press release, they said:

Marilinda Garcia has an impressive record of legislative leadership as a State Representative in New Hampshire. Marilinda helped New Hampshire overcome an $800 million budget shortfall while she was a member of the Finance Committee, and she would bring this same mentality to Washington. Her experience and values mirror the core principles of Maggie’s List:

“Maggie’s List is excited to have an experienced candidate to run for New Hampshire’s 2nd Congressional District,” says Sandra B. Mortham, Chairman of Maggie’s List and former Florida Secretary of State. “Marilinda Garcia is a proven fiscal conservative who has served the people of New Hampshire fighting for lower taxes, less intrusive government, fiscal responsibility and economic growth.”

With Garcia’s town hall tour concluding as well, the question is did her public visibility, defense of conservative values, and a time for change narrative resonate with voters in a congressional district that went twice for Obama in 2008 and 2012?

Also, Garcia hit a bump in the road when it was discovered she didn't properly attribute some parts of her speeches. She has since apologized for not giving proper credit.  Regardless, the National Republican Congressional Committee decided to spend $100,000 in television ads in the final week of the election.

We shall see if it pays off tomorrow.