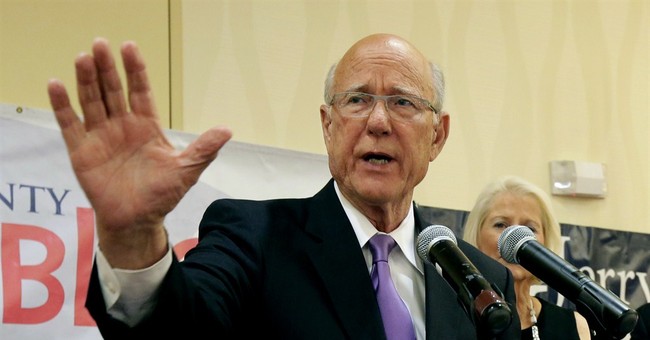 For Republicans, the Kansas Senate race just got interesting. Democrat Chad Taylor decided to drop out of the race last night. In one move, the GOP is now on defense as Greg Orman, an independent, is positioned to make incumbent Republican Sen. Pat Roberts’ re-election chances more difficult. Or does it?

Sen. Roberts beat his primary challenger, Milton Wolf, but it wasn’t a strong finish. On top of that, his approval rating is at a dismal 27 percent. Yesterday, Politico cited Kansas as one of five “sleeper Senate races” in the 2014 cycle; talk about good timing.

With Chad Taylor out of the picture, Orman takes 10-point lead over Roberts. If it were still a three men in the race, Sen. Roberts would have a slight 4-point lead. Nate Silver over at FiveThirtyEight explains why Taylor decided to drop out, despite polls showing he wasn’t in terrible shape:

Perhaps because he and Orman share a lot in common philosophically. Based on the ideological ratings we track (more background on those here), both Taylor and Orman rate as the equivalent of moderate Democrats. Orman, in fact, ran as a Democratic candidate for the Senate in 2008, although he withdrew from the race during the primary.

But Orman had raised more money than Taylor — about $625,000 in individual contributions to Taylor’s $120,000 as of July 13 — and probably had more momentum, having recently received endorsements from a bipartisan group of legislators.

There was also a recent

Oh jeez, stick a fork in Roberts. He’s finished, right? Well, not really. Orman is in trouble with Silver’s “fundamentals” department. These are a set of factors that are unique on a state-by-state basis. One of them is something you already know; Kansas is a red state. Sen. Roberts aligns more the electorate than Orman, who hasn’t won a statewide campaign let alone served in office.

Yet, the “fundamentals” are only meant to serve as a temporary gauge on the voter climate in the absence of polling [emphasis mine]:

In this case, however, we have only one poll of the Orman-Roberts matchup (and it was from the polling firm PPP, which has a series of methodological problems and which surveyed the matchup when it was still just a hypothetical possibility). So the model comes out somewhere between the survey and the fundamentals rating. It projects a narrow 2-point victory for Roberts, and gives him a 56 percent chance of winning against 44 percent for Orman.

For all intents and purposes, that makes the race a tossup. But it’s also a totally wild guess. The model is designed to recognize that the outcome is extraordinarily uncertain when the polls and the fundamentals diverge so much. So the margin of error on the forecast is enormous — the 90 percent confidence interval on the forecast runs from a 20-point Orman win to a 23-point victory for Roberts.

But if Roberts winds up beating Orman by a few percentage points, it wouldn’t be so surprising.

Silver also noted that something might break in Roberts’ favor. Orman’s more left-leaning views from the media attention could leave a bad taste in the mouths of Sunflower State voters. And the anti-Roberts voters from the primary might reconsider voting for Orman in protest given that he has a chance win in November. More conservative Republicans might not like Roberts, but they hate Harry Reid more.

I’m sure Mr. Silver and his wonks will come up with something more in-depth on this development.

Then again, let’s not forget that this state elected Kathleen Sebelius governor…twice. She was able to divide the conservative and moderate wings of the Kansas GOP to get elected in 2002.  In 2006, those divisions were seen again with Mark Parkinson, a prominent Kansas Republican, who switched parties to become Sebelius running mate in her 2006 re-election campaign; she won easily. In state government, Democrats and moderate Republicans would sometimes vote together and block conservative legislation (via Topeka Capital Journal):

The Kansas Republican Party, which has dominated Kansas politics since statehood, is deeply divided along fiscal and social lines. Abortion, gay marriage, stem cell research, taxes and school spending are some of the issues that put Republicans at odds.

Oftentimes in the Legislature, the split is obvious. Conservatives generally stick together. And moderate Republicans do as well, sometimes joining with Democrats to block the conservative agenda.

There are over 300,000 more registered Republicans than Democrats in Kansas, but there are also a little over 535,000 independents as well. Local news outlets are indicating that Orman is drawing support from all three groups. He definitely has a chance in this race, especially if he benefits from the divisions within the state GOP.

Those division are present with the Traditional Republicans for Common Sense, a moderate GOP group, who endorsed Orman this week. So far, Orman has received over 70 endorsements from former Kansas Republican lawmakers.

Editor's Note: This post has been updated since publication