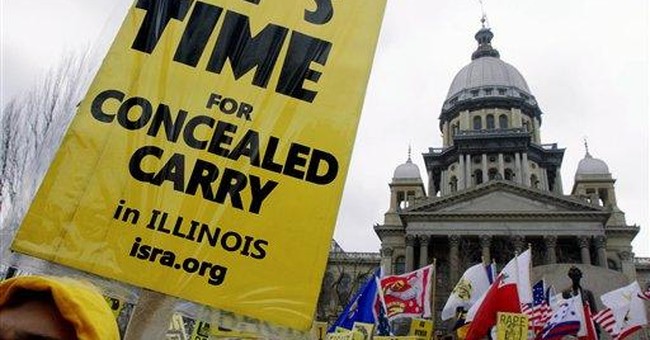 There’s some good news coming out of Chicago: the crime rate has dropped while coinciding with a surge in concealed carry permit applications. It’s gotten to a point where Democratic Mayor of Chicago, Rahm Emanuel, can safely say that the Windy City isn’t the “murder capital” anymore (via Washington Times):

Since Illinois started granting concealed carry permits this year, the number of robberies that have led to arrests in Chicago has declined 20 percent from last year, according to police department statistics. Reports of burglary and motor vehicle theft are down 20 percent and 26 percent, respectively. In the first quarter, the city’s homicide rate was at a 56-year low.

“It isn’t any coincidence crime rates started to go down when concealed carry was permitted. Just the idea that the criminals don’t know who’s armed and who isn’t has a deterrence effect,” said Richard Pearson, executive director of the Illinois State Rifle Association. “The police department hasn’t changed a single tactic — they haven’t announced a shift in policy or of course — and yet you have these incredible numbers.”

To put things further into perspective, when the state began issuing concealed carry permits earlier this winter, the rate of applicants was outpacing Obamacare enrollment. But, of course, the Chicago Police Department is crediting “intelligent policing strategies” for reducing crime and preventing the city from drowning in its own blood.

Kelly Riddell, who wrote the article, said “a July study by the Crime Prevention Research Center found that 11.1 million Americans have permits to carry concealed weapons, a 147 percent increase from 4.5 million seven years ago. Meanwhile, homicide and other violent crime rates have dropped by 22 percent.”

There have been brief bursts of violence in the city. Chicago had a very bloody Easter, with over forty people being shot, including several children, but it didn’t impact the declining murder rate. Additionally, last January, a study in Applied Economic Letters by Quinnipiac economist Mark Gius found that gun control laws don’t reduce crime. This was after examining data within a 29-year period. In his abstract, Gius wrote [emphasis mine]:

Using data for the period 1980 to 2009 and controlling for state and year fixed effects, the results of the present study suggest that states with restrictions on the carrying of concealed weapons had higher gun-related murder rates than other states. It was also found that assault weapons bans did not significantly affect murder rates at the state level. These results suggest that restrictive concealed weapons laws may cause an increase in gun-related murders at the state level.

Illinois was the last state in the country to allow its residents to carry concealed firearms.