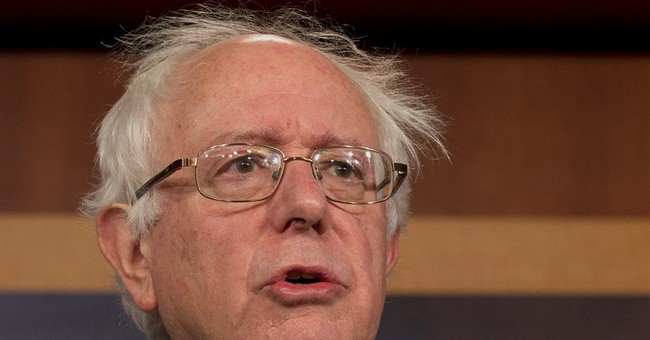 This certainly would be a surprise if Vermont Senator Bernie Sanders, an independent who caucuses with Democrats, runs in 2016. The self-described democratic socialist said last week we shouldn’t “anoint” Hillary just yet.

Sen. Sanders also isn’t afraid of being called a socialist. And said he had a “damn good platform” for a presidential run (via Yahoo!):

"If the American people understand what goes on in countries like Denmark, Sweden, Norway, and other countries, they will say, ‘Whoa, I didn't know that!’” Sanders said, pointing out that health care is considered a right, “R-I-G-H-T,” among even the most conservative politicians in Denmark.

Sanders described his credo as a fight to protect America’s working class from what he sees as the threat of an approaching “oligarchic form of society.”

“You have today in America more income and wealth inequality than any time in this country since 1928 and more than any major country in the world,” Sanders said. “So, you got the top one percent owning 38 percent of the wealth in America. Do you know what the bottom 60 percent own? 2.3 percent.”

“You know what that is?" he said. "That's called oligarchy."

Though Sanders isn’t making any secret of his possible 2016 presidential bid, he said he’s still determining whether he could generate a sufficient level of grassroots support on which to build a campaign.

One of Sanders’ most likely competitors, should he choose to seek the Democratic nomination, is Hillary Clinton. And while Sanders praised Clinton for a successful career, he was critical of the Democratic Party’s seeming coronation of the former secretary of state.

"She has accomplished a lot of very positive things in her career, but I'm not quite sure that the political process is one in which we anoint people,” Sanders said.

Though he stopped short of criticizing Clinton directly, he said she is not a sufficient champion of his message for the middle class.

Well, even “the most conservative politicians” in Denmark would be labeled liberal here in the U.S. Also, the senator should know that conservative means something entirely different across the pond. As for presidential ambitions, Sanders, like Warren, is hinting at making challenges so that more centrist–or perceived centrist– candidates, like Hillary Clinton, make sure their leanings veer towards the left.

Allahpundit made a note of this last June after Sen. Warren’s interview with Huffington Post Live:

What she’s really doing here, I think, is preserving a little strategic ambiguity to keep the pressure on Hillary to pander to the left. She’s not going to run and she wouldn’t win if she did, but if she starts speaking campaign-ese, she can make sure that Hillary invests in plenty of income inequality rhetoric next year that the left can hold her to later.

Alas, Sen. Warren isn’t going to run. But the progressive challenge threat remains. Hillary still hasn’t sharpened her already dull campaign skills from 2008–and don’t expect anything once 2016 rolls around. She’s not a good campaigner, who could struggle if Sanders decides to channel his inner-Warren. Even if he is in the race just to raise the issues adored by the far left of the Democratic Party.

Although, given her recent gaffes, especially about her wealth, and the outrageous demands Hillary makes when making speeches; it's not totally insane (we’re talking Democratic politics here) to say that he could siphon some of Hillary’s grassroots support. At Netroots Nation, the crowd went nuts when Sen. Warren gave her keynote address; a sign that shows she’s where the Democratic base aligns on the issues. And that’s a bit unnerving. Sen. Sanders also fits in with this crowd very well.

Additionally, Hillary also isn’t looking as invincible as she once did in February. The left-leaning Washington Post documented her precipitous decline last week:

But for right now, Sen. Sanders is defending Israel, telling people to “shut up” at town halls about the Gaza conflict. I guess we can assume his position on Israel won’t be a hostile one if he mounts a 2016 campaign, right?

The fireworks begin around 3:15. One woman says Hamas' tunnels in Gaza were for "survival purposes."