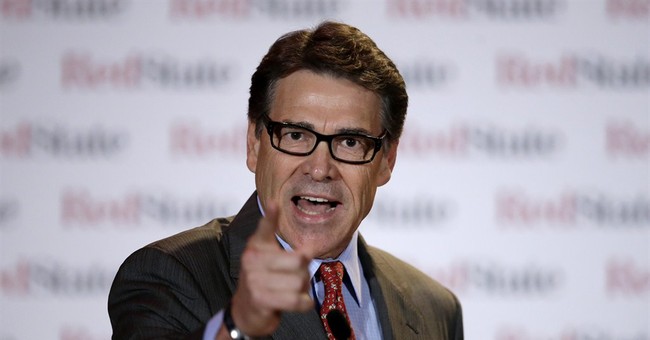 In case you missed it, Gov. Rick Perry was hit with an abuse of power indictment by a grand jury in Austin, Texas. It stems from his veto of a state prosecutorial unit, whose District Attorney refused to resign after she plead guilty and served a jail sentence for drunk driving (via WSJ):

Texas Gov. Rick Perry was indicted by a grand jury in Austin on Friday on charges of abuse of power, a possible setback to the Republican governor as he considers a second bid for president.

He was accused of improperly withholding money from a state prosecutorial unit because its Democratic district attorney refused to resign after pleading guilty to drunken driving.

The complaint was filed last year by Texans for Public Justice, a liberal watchdog group.

Mr. Perry vetoed $7.5 million in funding for the Travis County Public Integrity Unit, which handles political corruption investigations, following the drunken-driving arrest of District Attorney Rosemary Lehmberg. Travis County includes Austin, the state capital. "The person charged with ultimate responsibility of that unit has lost the public's confidence," he said at the time of his veto.

I do not have a fancy law degree from Harvard or Yale or, for that matter, anywhere. I am but a humble country blogger. And yet, having read the indictment, legal training of any kind seems unnecessary to grasp its flimsiness.

Perry stands accused of violating two laws. One is a statute defining as an offense “misus[ing] government property, services, personnel, or any other thing of value belonging to the government that has come into the public servant's custody or possession by virtue of the public servant's office or employment.” The veto threat, according to the prosecutor, amounted to a “misuse.” Why? That is hard to say.

But that statute also specifically exempts “an official action taken by the member of the governing body.” The prosecutors claim that, while vetoing the bill may be an official action, threatening a veto is not. Of course the threat of the veto is an integral part of its function. The legislature can hardly negotiate with the governor if he won’t tell them in advance what he plans to veto. This is why, when you say the word “veto,” the next word that springs to mind is “threat.” That’s how vetoes work.

The theory behind the indictment is flexible enough that almost any kind of political conflict could be defined as a “misuse” of power or “coercion” of one’s opponents. To describe the indictment as “frivolous” gives it far more credence than it deserves. Perry may not be much smarter than a ham sandwich, but he is exactly as guilty as one.

Here’s a copy of the Perry indictment.

And here’s Rosemary Lehmberg acting like most people after way too many drinks.

Gov. Perry said, "I’m going to fight with everything that I have against those who would erode our state’s constitution purely for political purposes."