A Tale Of Two Gazas 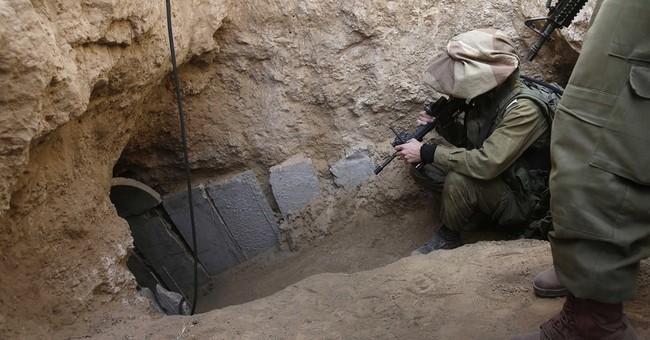 As Israel and Hamas agree to another 72-hour truce, we must hope that Hamas doesn’t screw it up. Nevertheless, Israel is withdrawing most of its troops from the Gaza Strip after a month of fighting. They claim that all known Hamas tunnels have been destroyed. That’s the subject that needs to be discussed after the dust settles in this latest round of fighting between Israel and Hamas; why is it that subterranean Gaza is so much more developed than what’s on the surface?

How much money did Hamas spend to create these infrastructures of hate and terror? For just one tunnel, the bill came out to nearly $10 million (via JSpace News):

On a Monday in October 2013, residents of Kibbutz Ein Hashlosha just east of the Gaza border heard strange sounds, which the IDF discovered were later coming from below the ground–terror tunnels. The IDF then discovered that the sounds signaled an “extremely advanced and well prepared” tunnel.

The burrow was 1.5 miles long and 66 feet underground and was equipped with electricity and contained enough yogurt, cookies, and other provisions to last its occupants several months. Israeli forces estimated that Hamas had dumped $10 million and 800 tons of concrete into the two-year project.

So, are we talking about two Gazas? It seems that way, but it also exposed that Hamas was placing its their struggle to destroy Israel over bettering the lives of their own people. For a terrorist organization, this comes as no surprise. (via Al-Monitor):

It was suddenly revealed that there are two Gazas: One is the crowded, impoverished and faltering Gaza, but there is also an “underground Gaza,” buried deep below the surface. As of now, the IDF has located 36 tunnels, but even during the current fighting, with the IDF still searching the area, terrorists have been sent to launch attacks deep in Israeli territory through tunnels that have yet to be discovered. According to the security source’s assessment, these are enormous tunnels, the planning and preparation of which probably lasted approximately three years. The cost of excavating, reinforcing and maintaining each tunnel is approximately $1 million, and as far as is now known, dozens of such quality tunnels were dug along the border between Israel and the Gaza Strip, from the northernmost part of the territory all the way to the south.

Much to the misfortune of the people of Gaza, Hamas has invested far more resources in “underground Gaza” than in “upper Gaza.” The border tunnels and the defensive tunnels intended to ensure the safety of the Hamas command cadre proved that the movement’s priorities were flawed. The movement was founded as a welfare organization, intended to provide for the needy of Gaza, but instead it invested its resources in its own needs, at the expense of the population. Anyone who voted for Hamas in the 2006 elections as a way of protesting Fatah’s corruption received a very different kind of corruption instead. The “change and reform” that Hamas offered its voters was invested in its tunnels at the expense of the people of Gaza.

The New York Times reported that each tunnel would cost $2 million each, while Israel Defense Forces (IDF) estimate that each tunnel costs $3 million to build. It's safe to say that this undertaking wasn't cheap.

The IDF tweeted this graphic showing where the tunnel money could’ve gone to improve the lives of ordinary Palestinians.